We look at 13 pictur­es of events from around the world
By Multimedia Desk
Published: August 6, 2016
Tweet Email 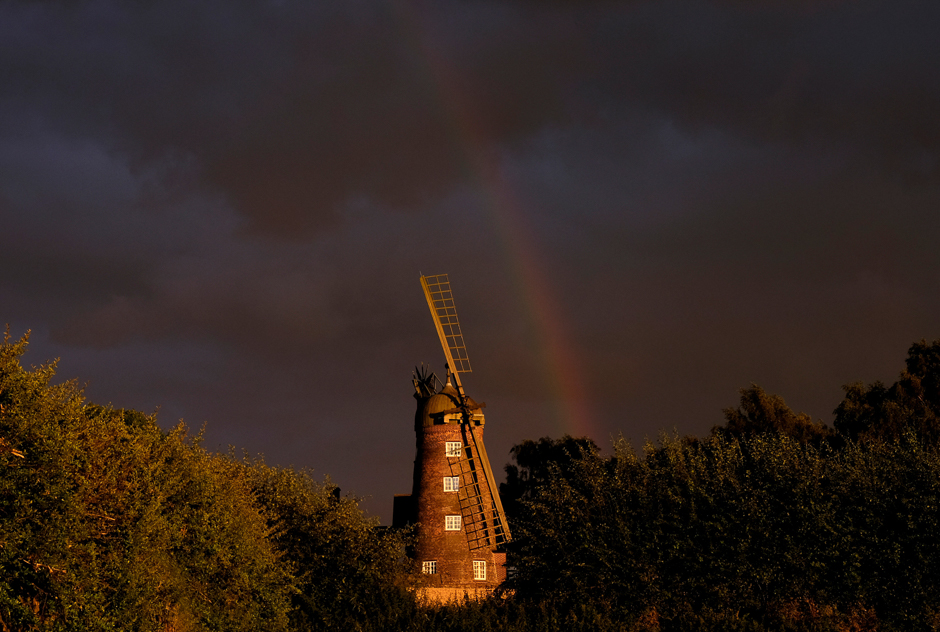 A rainbow forms over a windmill after rainfall in Shepshed, United Kingdom. PHOTO: REUTERS The Maracana stadium is seen from the favela Mangueira as fireworks explode during the opening ceremony of the Rio 2016 Olympic Games in Rio de Janeiro. PHOTO: AFP People demonstrate against the Rio 2016 Olympic Games and the interim President Michel Temer in Rio de Janeiro. Thousands of Brazilians launched angry anti-Olympics protests hours before Friday’s Rio Games opening ceremony in fury at political scandals rattling the host country and the billions spent on the event. Waving signs reading “No to the Olympics!”, a crowd of about 3,000 blocked an avenue outside the luxury Copacabana Palace Hotel where many Olympic athletes are staying. PHOTO: AFP People look out from a window as they watch a protest against the recent killings in Kashmir, on the outskirts of Srinagar. PHOTO: REUTERS The Christ is lit in Brazilian colors with special Led lights by French artist Gaspare Di Caro on the Corcovado hill. PHOTO: AFP A man looks out of a window at the headquarters of Spanish builder OHL in Madrid, Spain. PHOTO: REUTERS Floral tributes are pictured left near a crime scene in London’s Russell Square after a stabbing spree Wednesday that killed US national Darlene Horton and injured five others. PHOTO: AFP A bridge knocked down by Hurricane Earl at the Arroyito neighborhood in the Melchor de Mencos municipality, Peten departament, 587 km northeast of Guatemala City. PHOTO: AFP A woman lights up a candle in front of the cenotaph for the victims of the 1945 atomic bombing at Peace Memorial Park in Hiroshima, western Japan. PHOTO: REUTERS An Election Commission volunteer sits among ballot boxes before checking on them a day before the referendum on a new constitution, at Ratchathewi district office in Bangkok, Thailand. PHOTO: REUTERS Supporters of the UK branch of “Black Lives Matter” take part in a demonstration in London, Britain. PHOTO: REUTERS A firefighter stands in front of a cargo plane that exited the runway after landing and slid onto a local road in Orio al Serio, next to Milan, Italy. PHOTO: REUTERS