71 years ago, when suffering broke all limits in Hiroshima

71 years ago, when suffering broke all limits in Hiroshima

People of Hirosh­ima hold on to the past for a peacef­ul future­
By Manahil Mahmood Sardar
Published: August 6, 2016
Tweet Email 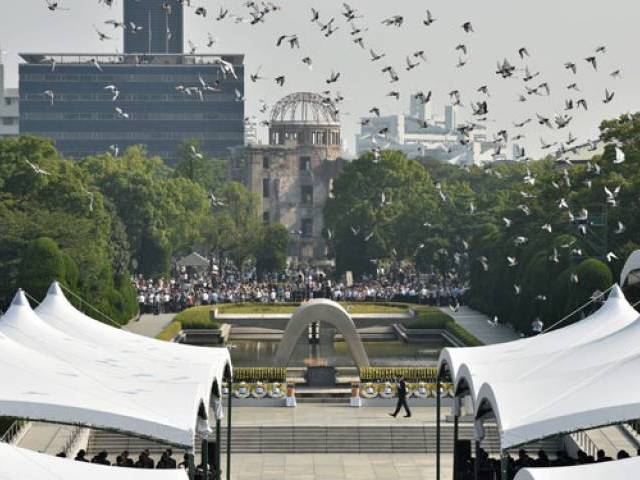 One of the stories I heard of the atomic bomb survivors in Hiroshima was of a woman who described a rainbow-coloured light in the moments of the terrifying explosion. I found it surprising that she used the word ‘kirie’, meaning beautiful in Japanese, to describe the flash of light produced by the nuclear detonation that killed approximately 146,000 people. The explosion shook all our previous knowledge of weapons of mass destruction and that is why it was so frightening. Before I went to Japan, I did not know if Hiroshima was inhabited by people because radiation lingers for a very long time. But today, it is safe to visit and live in the city. Radiation levels have gone, partly because the bomb was detonated in the air and that minimised the radioactive fallout on the ground. But the people in Hiroshima, those who died that day, and those who survived and their generations afterwards have suffered to an unimaginable degree.

The day the bomb fell, the temperature in Hiroshima soared up to 4,000°C. Just close to the temperature of the sun. Essentially, a small sun was dropped on the people at 08:15am on August 6, 1945. At that time, a watch in the pocket of a 59-year-old man named Kengo Nikawa stopped forever. Kengo did not survive the bomb, but his watch, which was a gift given to him by his eldest son, did, and now it lies inside a glass box in the Hiroshima Peace Museum, freezing time for eternity. There is a famous saying, “God is in the details” and interestingly it has a variant, “the devil lies in the detail”. They both mean the same thing that beauty, truth and all mysteries lie in details – in small things. Seventy-one years ago, on this day, it was only small things that survived – fragments of people’s lives. Death was recognised by the artefacts people left behind. A hat, a school bag, a sewing notebook and tatters of a summer uniform that a girl stitched herself. An unopened lunchbox a mother found, the lunch burnt black. She had prepared it for her son the morning the bomb dropped. There was also a tricycle and a helmet of a three-year-old boy who was burnt alive while riding it. The body of a first-year student, Miyoko Osugi, was never found, but her mother found her wooden sandal… two months later. She had recognised it by the strap Miyoko had made herself, using material from her kimono. The print of Miyoko’s left foot still remains on the sandal and just like her, many victims only left behind their shadows on the ground or on objects nearby, which were later called atomic shadows. They are preserved in the museum in the condition they were discovered.

As I moved across this heart-breaking museum of fragments, I saw locks of hair that a mother had cut off from her dying daughter’s head as a keepsake. A memory she could keep, just as the small plate in the museum that displayed nails of a man dear to someone. Each of these items displayed grief, desperation, anger and pain.

One such story is of Sadako Sasaki and her thousand paper cranes. When the bomb struck, Sadako was two years old, living 70kms from the hypocentre. There was no sign of any injury on her body, but just like everyone, she was exposed to radiation. When she turned 11, she was diagnosed with leukaemia and was given only a year to live. An old Japanese legend promises that whoever folds a thousand paper cranes will have a wish granted. Hers was to live. In desperation, Sadako began folding as many paper cranes as she could with her frail little hands in her hospital room, but she only managed to fold 644 before she died. Her story soon became viral and, inspired by it, efforts were initiated to make a children’s memorial in the Hiroshima Peace Park, in memory of the children who died that day and the many whose lives were drastically shortened because of the exposure to radiation. As I walked towards the park, I saw an old Japanese couple who had become ‘peace volunteers’, teaching people how to make paper cranes. With their help, I made one too. And as I went to hang my origami on the memorial, I was taken aback by the sea of hundreds of thousands of colourful paper birds. People from all over the world visit the memorial and make paper cranes, and hang them on to the memorial for Sadako and for Hiroshima. The 11-year-old girl could not complete her thousand paper cranes, but she got so many more.

History is said to be written by victors, resulting in certain tragedies being considered more tragic. For instance, we all unanimously consider the Holocaust to be one of the most condemnable legacies of the Second World War. In fact, many people still believe the bombings of Hiroshima and Nagasaki were justified to end the war. But if you notice, both events are similar in some ways. In both, the victims were first discriminated against and then dehumanised to the point that it seemed reasonable at the time because they were the ‘enemy’. We mark the atomic bomb invention as the beginning of a new age: The nuclear age. But all these debates around the necessity of nuclear bombs to end the war seemed irrelevant and downright callous to me as I stood in this place where the explosive was dropped 71 years ago, trying to imagine the day from the pictures, stories and artefacts that survived. The same day humanity descended to its lowest. But if you ask the people of Hiroshima whether they hold any grudge against the United States for dropping the nuclear bomb on them, they would tell you they don’t, because holding grudges only sets off a chain of retaliation. They blame war for causing suffering on both sides, so they relentlessly campaign for a genuinely peaceful world, free of nuclear weapons. Even on the back of souvenirs, they write “Peace from Hiroshima” in hopes of sending a part of their strong peace resolution to the rest of the world.

Today, Hiroshima has grown into a beautiful city where cherry trees bloom every spring. This is no ordinary feat, as after the bomb it was said no tree would ever grow in the city. So when the first tree grew, the whole city rejoiced the way happy parents celebrate the small milestones their children achieve. Trams glide up and down its hilly roads. The Ota River runs through the city, providing many scenic spots. Cranes hover in the sky, making new buildings. The city has a calm soulfulness to it while at the same time there is a sense of urgency to grow and progress. And in the midst of all of this stands the A-Bomb dome, the only surviving structure from the atomic bombing, which is now a symbol of peace that the city carries as well as the memory of the day that is both painful to remember and impossible to forget. But Hiroshima is slowly walking out of the atomic shadows, catching up with the world real fast.

Is Yusra Mardini the most extraordinary athlete at the Rio Olympics?