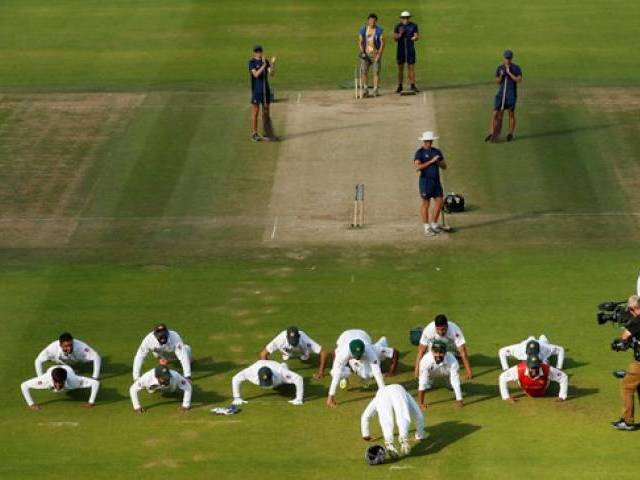 Pakistan captain Misbahul Haq has said the team is ready to bounce back from their resounding 330-run defeat to England.

The 42-year-old made a tongue-in-cheek reference to his side’s now-famous push-up celebration after winning the first Test at Lord’s. “Obviously we have been doing everything we can [to win the third Test],” he said. “And let us see if we get another chance to do some more push-ups.”

Misbah feels the batsmen need to up the ante after letting the team down in the second Test. “We need to improve [with the bat],” he said. “If you look at the last Test match, we let them score heavily in the first two days. We didn’t put pressure on them. They scored nearly 600 runs but we could have done better with the bat; we need to really improve that. Especially, after getting starts, we need to go big.”

However, Misbah believes defeats help identity and iron out whatever the players are doing wrong.

“Every loss gives us a reality check,” he added. “It helps us analyse our mistakes and rectify them. There are occasions when we made great comebacks and we are hoping to walk in with the attitude that we have to wash away the disappointment of the last match.”

“That has happened to him so many times and he always comes back with an amazing innings,” said Misbah. “We are looking forward to him producing such an innings in this series. “

Fair play to @TheRealPCB who played some excellent cricket and good celebrations too. #EngvPak https://t.co/czkHg2bFsu

The skipper also backed leg-spinner Yasir Shah to emerge stronger from his Old Trafford trouncing, where he gave away 266 runs for only wicket in the Test.

Younus Khan responds to questions on his batting style

“It can happen to anyone. He is good enough to come back strong. We are hoping he knows what he did wrong in the last game,” said Misbah.

When asked about the tactics Pakistan is going to employ against England captain Alastair Cook and middle-order batsman Joe Root, Misbah stayed shush but he did not shy away from telling how important it was to get both players out early.

“In every team there are key players and at the moment those two are in a good form,” he said. “Their record speaks for itself. If you have to put pressure on opposition, you have to get their main players out. It can psychologically hurt the opposition and give you an advantage. “

On the exclusion of opener Ahmed Shahzad and middle-order batsman Umar Akmal from the probables for ODIs against England, Misbah said every cricketers needs to set his priorities straight.

“A team is bigger than any player,” he explained. “We have to understand this and we have to discipline ourselves. Our priority should be fitness and performance. If my priorities are not set rightly, even I should not be allowed in the team.”