Coke Studio for the Deaf: Enhancing the human experience

Coke Studio for the Deaf: Enhancing the human experience 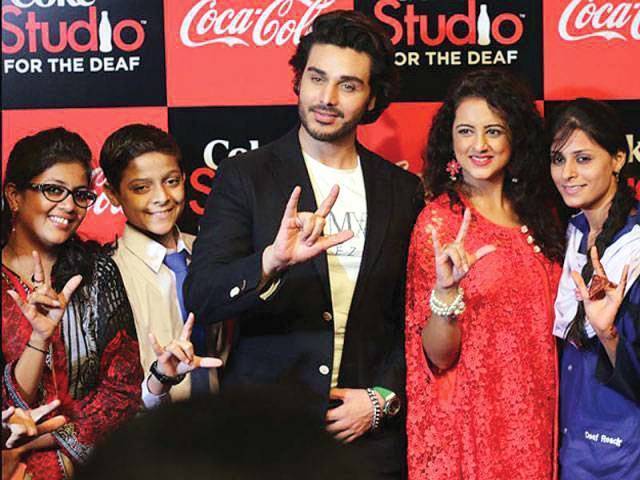 Actors Ahsan Khan and Muzna Ebrahim were present at the event. PHOTO: PUBLICITY

KARACHI: The concept that music should not be heard but also felt holds true with the latest venture of Pakistan’s biggest music show.

Coke Studio for the Deaf hopes to help Pakistan’s hearing-impaired community experience music through lights and vibrations for the first time. Joining hands with Deaf Reach Schools and Training Centres, Coke Studio on Saturday launched the initiative that aims to help the nine million people in Pakistan with some form of hearing loss.

Preceding the upcoming season’s launch by a few weeks, the event began with a rendition of the national anthem in sign language by students of the Deaf Reach School, leaving everyone in attendance emotionally charged.

Subsequently, a video package was played as a manifestation of the idea. Earlier this year, the show’s team flew eight students and faculty from the school to Thailand, to test an exclusive system that enables the hearing impaired to feel music. Their responses were filmed. The technology – invented in China — will soon be brought to Pakistan, after the success of the tests conducted in Bangkok.

As seen in the video, the setup consists of a studio-like room with sofas embedded with vibration engines and LED lights synced with the music being played. A grand LED installation around the couch provides synchronised mood lighting to elevate the experience visually, infusing perhaps a more psychedelic feeling, nuanced by proper lighting and rhythmic thuds; something one can loosely experience by standing near a giant sound system.

The students were seen grooving to some of Coke Studio’s biggest hits from last season, such as Quratulain Baloch and Umair Jaswal’s Sammi Meri Waar and Atif Aslam’s Tajdar-e-Haram.

One of the eight students, Huda Muhammad Ali, is also seen sharing her experience in the video. “When I sat on the sofa and the music started, I felt some vibrations in my legs and heart. They were intermittent but it made me feel the waves of music. It felt so good!”

The video, which has gone viral on social media, garnered a vehement response from the audience that consisted of media personalities, fashion designers, actors, businessmen and students alike. Celebrities such as actors Ahsan Khan and Muzna Ebrahim, singer Zeb Bangash and fashion designer Deepak Perwani were also in attendance.

He emphasised on the project’s aim to create more awareness and acceptance across the show’s mainstream audience and help people understand the challenges faced by differently-abled people.

When asked about the possibility of making the technology more accessible, Geary told The Express Tribune, “It’s interesting because I was talking to one of the engineers when we were testing and he seemed really excited at the prospect of coming up with some kind of a belt you can hang around the waist, or something similar that would create vibrations similar to that of the couch.” He went on to add, “I mean, it is possible but it would be too soon to talk about it right now.”