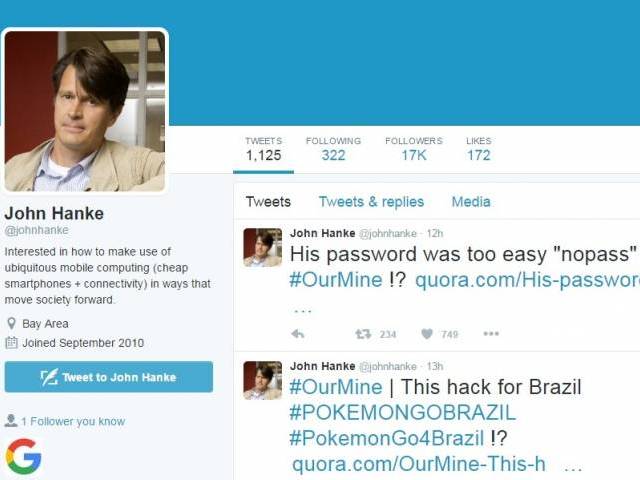 Hackings are on the rise and they seem to target almost everyone. From celebrities to politicians, no one is safe and the latest target was none other than Pokémon CEO John Hanke.

Hanke’s Twitter accounts were hacked on July 31 with a series of tweets being posted to his followers. The attack has been claimed by OurMine in retaliation to Pokémon Go not being released in Brazil.

The tweets posted by the hackers also mentioned that Hanke’s password was “nopass” which they found after using a brute force tool. The hacker group also claims that it has access to his Foursquare and Facebook accounts.

OurMine have a reputation for hacking high profile accounts that include those of Google CEO Sundar Pichai and Facebook CEO Mark Zuckerberg. It also claims to be responsible for a recent DDos attack on Pokémon Go servers.

A member of the group explained to Forbes that the attack is not in retaliation to any changes by Niantic to the Pokémon game but rather on request from the general public. “We are just trying to tell everyone that nobody is safe,” they said.

The hackers also warned that people use two-factor authentication security and change their passwords every two three weeks.

This article originally appeared on Forbes.