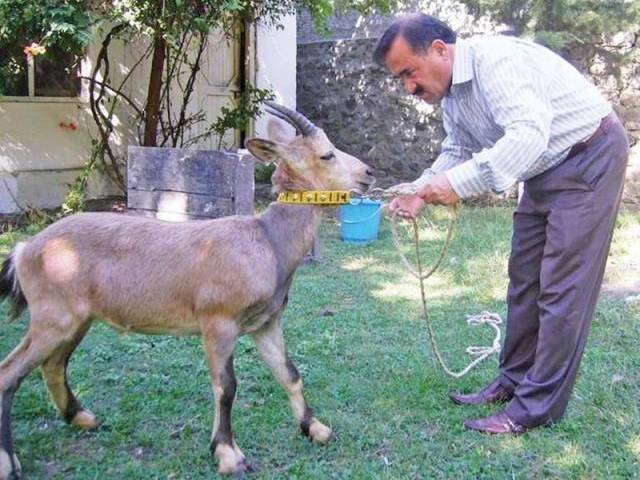 An official from the wildlife department looks after a baby ibex. PHOTO: SHABBIR MIR/EXPRESS

According to a report compiled by the International Fund for Animals Welfare (IFAW), illegal wildlife trade generates an estimated US$19 billion every year. The trade ranks fourth on the list of most lucrative businesses, closely behind narcotics, human trafficking and counterfeiting. On March 3, 2015, the United Nations gave illegal wildlife trade the status of ‘organised crime’ and urged governments to take action to strengthen their legal framework, which means it should have the same enforcement techniques, tools and penalties as other organised crimes.

Pakistan is also a part of this trade. We often see reports of illegal freshwater turtles’ trade across borders to meet demands of this popular pet, the black potted pond turtles or soft-shelled turtles. In 2015 alone, consignments with estimated worth of Rs143 million were confiscated. Besides this, there is also a growing trend of keeping wild animals as pets; the animals become a reflection of one’s financial status and power. Exotic animals, such as lions and tigers, are particularly popular. Few being associated with political party symbols also gained popularity amongst supporters. During the elections, they were dragged on streets or kept at roadside without any notice, until public interest litigation was filed.

Two years ago, IFAW investigated online marketplaces in 16 countries and found a total of 33,006 endangered wildlife, and wildlife parts and products listed on the Convention of International Trade in Endangered Species of Wild Fauna and Flora (CITES) for sale in 9,482 advertisements, estimated to be worth at least US $10 million. Of the advertisements, 54% were for living animals while 46% were for animal parts and products. The situation is not any different here. There are people selling all sorts of exotic and indigenous animals online, through Facebook and OLX. And Karachi, apart from being the hub of international trade, is a channel for illegal wildlife business.

In 2012, Karachi zoo received a donation of two chimpanzees while the Ministry of Climate Change, which issues permits under CITES, had never issued import permits for chimpanzees in over a decade. In fact, when I was serving on the Lahore Zoo Management Committee, the zoo was offered a male chimpanzee with no associated papers, making it clear that the animal was brought illegally.

Moreover, indigenous species are also illegally traded in the city. There are so-called bird markets with all kinds of animals available. A trip to the Empress Market, in Karachi, is enough to make one find a variety of endangered wildlife species available for sale, from falcons to flamingos and rhesus monkeys to fishing cats. Their trapping and possession are illegal unless the wildlife department has issued a special permit. While I was at the market, I witnessed a large crate with cramped up waterfowl brought in and, upon inquiry, the person said there are many available in lakes of Sindh which are easily captured and sold. However, even the movement across provinces requires permits. Considering a rhesus monkey is not found in Sindh and it was up for sale in the market, it must have been brought from either Punjab or Khyber-Pakhtunkhwa illegally.

The Sindh Wildlife Department is making efforts to end such practices and recently, also conducted a raid on the Empress Market, but that is just a temporary solution. The wildlife departments, overall, are poorly budgeted and lack the facility to keep these confiscated animals, or even the resources to enhance vigilance at the field level. On top of this, the punishments for such offences are small. Usually, the offenders take the plea of livelihood and courts release them with minor fines, although a legally allowed two year imprisonment can be more effective.

The main problem is the availability of these animals in markets reflects the demand that invigorates supply. People need to realise wild animals, though very appealing as pets, come to their homes usually through illegal means and in this process, of trapping from the wild and transporting, many even die. These animals are usually taped to immobilise, hidden in luggage and are deprived of food and water, and trappers do not even treat them well. As a result, owners, usually those who love animals, are unintentionally contributing to the loss of wildlife and inflicting pain to animals. Most importantly, it is also difficult to meet the behavioural and psychological requirements of these species at home. The wild animals are instinctively meant to be in the wild.

On the other hand, sometimes when an animal grows larger than its ‘cute and cuddly’ phase, owners abandon them. Zoos are regularly offered a number of monkeys because owners can no longer keep them at home. Besides, keeping dangerous animals in urban areas is also a threat to public safety. Imagine if a lion escapes its enclosure and roams on the roads, it will be met with the same fate as a harmless pangolin, which was shot dead.

Although, Pakistan is improving its legislative framework to curb wildlife trade, and Pakistan Trade Control of Wild Fauna and Flora Act 2012 is an example of this, but a lot still needs to done in defining animal welfare standards in captivity. Animal welfare in private facilities is an unknown domain. Kaavan, the elephant, only came to limelight because it was kept at a public zoo, located in the elitist locality. There are many wild animals suffering in private zoos and breeding farms or in homes because there is an absence of monitoring system or legal framework.

Dr Uzma Khan is an endangered species management specialist and can be reached at primatekhan@gmail.com

New Islamabad airport to be completed by 2017