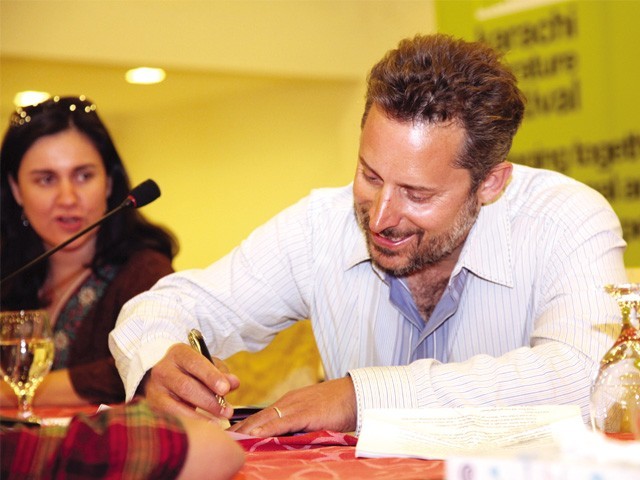 KARACHI: The terribly sexy Daniyal Mueenuddin had eager listeners shocked and amused when his New York English turned into Khanpur Punjabi. “When I had asked the munshi (manager) of my land where his land was, he replied, ‘Jidday tuadi zameen hai utay saadi zameen wi hai’ [where you have your land, I have some as well]’.”

He was reading an unpublished piece – quite to people’s excitement – inspired by the time Mueenuddin first visited his father’s land in the Punjab. The short-story writer tweaked his accent to match each character. In one part, a thanedar gets up from the table in his office and goes into an “improvised toilet”. After a few moments of silence, a local and rather flamboyant attorney shouts out, “Do you need a hand? Aaoon?” The thanedar cockily shouted from inside, “Aarn walay puchh ke nayi aanday!” [Those who come don’t end up asking].

He instantly apologised for being rude.

Moderator Kamila Shamsie asked about fiction writing. “Fiction is most defined by its absences,” said Mueenuddin. “It’s like creating a room of smoke and mirrors.” The reader joins the pieces together. That is what television does not do for you as you don’t have everything shown and said. “So read more fiction,” he said in an administrator’s droning tone, wagging his finger.

Shamsie pointed out something remarkable about Mueenuddin: he was particular about the sequence of his short stories, which otherwise we all think really doesn’t matter. “It’s about the larger narrative curve,” he said. “The first and last stories have to be the best.” Shamsie elaborated. “It’s like starting from a great high and the last one is like a dying fall.”

How is Mueenuddin during the course of writing? “Everyone has those moments when you think you’ve run into a brick wall. Some parts have a eureka moment when you go ‘prringg’ and you just start typing. But other times, there is this despair where you feel like you can never write again. That is when you’re a soldier and you just have to finish.”

Mueenuddin believes in a hierarchy of literature – poetry, short stories and novels. “Poetry is like you’re standing in the rain waiting to be hit by lightning and writing novels is like you put the meat in a grinder and a sausage comes out in the end.”

“I will beat him after this,” quipped Shamsie.

When the session had started, she had welcomed him for being in Karachi for the first time. Indeed, his Karachi fans were so keen on hearing him in person that noise in the audience was met with a vociferous “Keep quiet!”