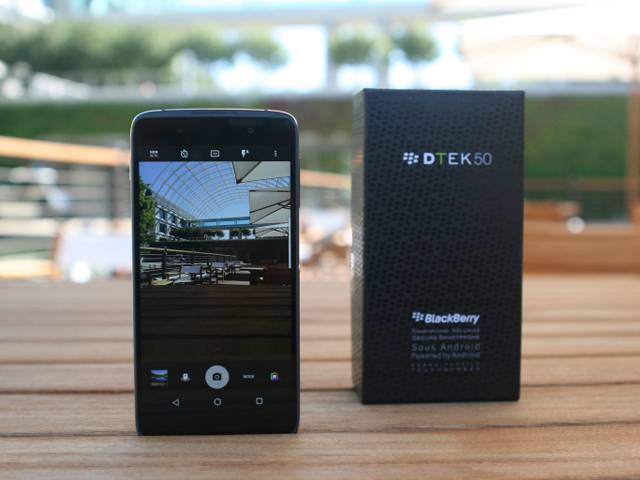 We have just one question, in this age where we are surrounded by touch technologies, who writes ‘touchscreen’ on their smartphone’s box?. PHOTO: BLACKBERRY

BlackBerry has unveiled it’s second-ever Android device, DTEK50, and as opposed to general expectations the device is surprisingly good.

The device has a 5.2-inch screen, 1080p display and has Qualcomm Snapdragon 617 processor with 3GB RAM. It has a 13-megapixel rear and 8-megapixel front camera with flash for taking selfies in the dark and runs Android 6.0 Marshmallow with BlackBerry’s software features, such as the Hub. DTEK50 is a sleek phone with a thickness of 7.4mm and has 2,610mAh battery. Looking at the device you might notice a striking resemblance between BlacBerry’s DTEK50 and Alcatel’s Idol 4, as the specifications in both the phones are the same.

However, DTEK50 is not about the device. BlackBerry is touting it as the world’s most secure Android device. The smartphone has BlackBerry’s DTEK software that the company claims protects users from malware and other security problems which Android users often face.

The software alerts you when your privacy is at risk as DTEK software monitors a device’s overall security rating and helps users tackle it. It also tracks your apps and notifies you when someone is taking pictures and videos without your knowledge, accessing your contacts, location, turning your microphone on or sending a text message.

All in all DTEK50 is a basic Android device packed with BlackBerry’s security features. The device is available to pre-order from ShopBlackBerry.com in the US, Canada, UK, France, Germany, Spain, Italy, and The Netherlands for $299.

We just have one question, in this age where we are surrounded by touch technologies, who writes ‘touchscreen’ on their smartphone’s box?

Have something to add to this story? Share it in the comments section below.