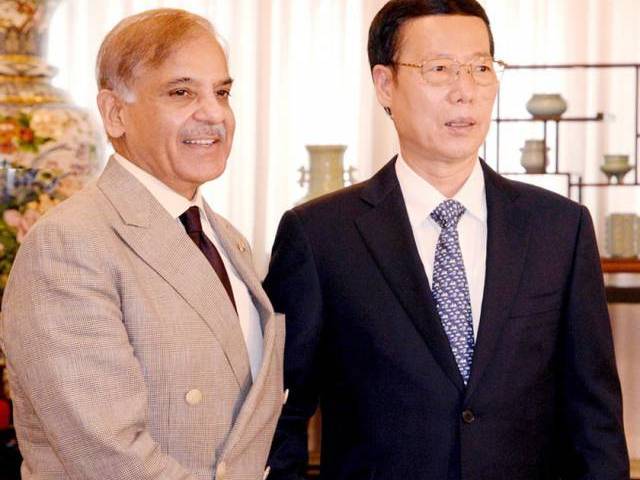 Speaking on the occasion, the chief minister said that Pakistan-China friendship was of value to every Pakistani. “Completion of China-Pakistan Economic Corridor (CPEC) projects will change the destiny of the region. It will promote Pakistani exports, as well as create jobs,” he said. The CM said that Pakistan had always supported China on ‘One China’ policy, Tibet as well as regional and international issues.

Yesui said that China had always stood by Pakistan and would continue to help it achieve progress and prosperity.

Seven agreements and 17 memoranda of understanding (MoUs) were signed between government and private companies of China and Pakistan at Pakistan’s embassy in Beijing on Monday.

Addressing the ceremony, the chief minister said that Pakistani traders and industrialists should benefit from the Chinese cooperation and increase mutual trade.

“The pace of implementation of development projects in Pakistan under the CPEC is unprecedented,” he said.

The chief minister met a delegation of Chinese print and electronic media, news agencies and radio at Pakistan’s embassy in Beijing.

“Pakistan-China friendship is based on golden principles of honesty, trust and transparency. The people of China and Pakistan should learn each other’s languages. There is a need to increase the exchange of delegations of traders, industrialists, scientists, artists, students and teachers,” he said.

“The Punjab government has sent you to China at its expense to learn Chinese language. Pakistani students are very talented. Learning the Chinese language is the need of the hour. It is now your responsibility to work hard and succeed,” the CM said.

He said that the government would send more students to China to learn Chinese language.

The chief minister also met Asian Infrastructure Investment Bank president Jin Liqun in Beijing. Liqun assured provision of funds on a priority basis for projects being completed with Chinese cooperation. He said that experience of Chinese financial institutions working in Pakistan had been very good. “There will be no shortage of resources for the projects in future as well,” he said.