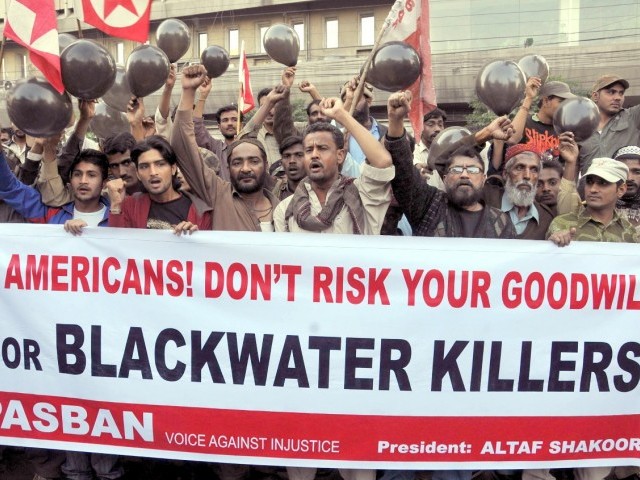 People in Karachi protest against the killing of three Pakistanis by an American citizen, Raymond Davis, on February 1. PHOTO: EXPRESS

LAHORE: The wife of one of the men shot dead by US citizen Raymon Davis committed suicide after taking poisonous pills on Sunday, fearing the American would be released without trial, police and doctors said.

Shumaila, the wife of Faheem, took poisonous pills and was taken to the hospital in Faisalabad, local police chief Usman Anwar told AFP, where she died despite attempts to save her.

“Doctors tried hard to save her life but could not succeed and she died a short while ago,” he said.

Her body will be handed over to the family after a post mortem, he said.

The widow of one of the men shot and killed by US citizen Raymond Davis attempted suicide on Sunday.

Fahim’s wife Shumaila took poisonous pills and was admitted to the Allied Hospital in critical condition where her stomach was pumped. Shumaila survived and doctors said that when asked, she told them she had swallowed the pills because she suspected that the government would release Davis and would not take action against him. “They are already treating my husband’s murderer like a VIP in police custody and I am sure they will let him go because of international pressure,” she said.

“The man murdered my husband and I demand justice. I don’t care if he is American he must not be allowed to get away with this,” Shumaila said.

Shumaila is a resident of Khurrian Wala in Faisalabad and said that she had been following the Davis case closely hoping for justice for her husband.

On Saturday, following a prayer and condolence ceremony for her husband, Shumaila returned to her home and at 5 am in the morning she swallowed an entire vial of poisonous pills.

Allied Hospital Dr Muhammad Irfan said that Shumaila’s family members brought her in early in the morning and doctors pumped her stomach.

“She is still in critical condition and is coughing up a lot of blood,” he said, adding that her family and ambulance workers said that she had been ranting about Davis and said that the government was capitulating to the West.

Fahim’s family said that they would take out massive protests if Davis was released and added that the government should make an example of him. “My family cannot survive without Fahim and we have no source of income now. All the while, everyone is saying that the government will let his killer go free,” Shumaila said.

Twin explosions in Karachi, no casualties