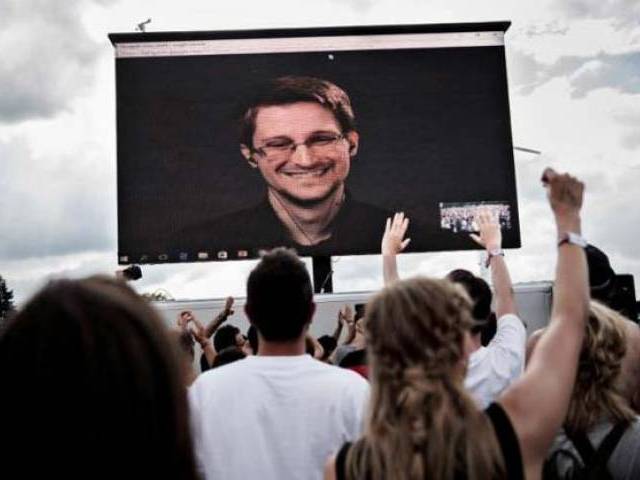 American whistleblower Edward Snowden is seen on a screen as he delivers a speech during the Roskilde Festival in Roskilde, Denmark, June 28 2016. Scanpix Denmark/Mathias Loevgreen Bojesen /via REUTERS

SAN DIEGO: It was the largest data leak in United States history, fueling a firestorm over the issue of mass surveillance that resonated with Americans and ignited around the world.

Oliver Stone’s hotly-anticipated “Snowden” tells the story of NSA whistleblower Edward Snowden in dramatic form for the first time — but the movie almost never made it theaters.

“Frankly, it was turned down by every major studio. The script was good, the budget was good, the cast was good. It was definitely… self-censorship,” Stone, 69, told San Diego fan convention Comic-Con International on Thursday.

“I don’t believe there was an enemy such as the NSA lurking in the background. But definitely self-censorship is a huge issue in this industry, and it blocks so much of the truth from coming out.

“Every studio, every corporate board that runs the studio, more than the studio people, said no.”

Snowden was charged by US authorities with espionage and theft of state secrets after releasing thousands of classified NSA documents to journalists Glenn Greenwald, Laura Poitras and Ewen MacAskill in 2013.

Considered a traitor by some and a hero by others, the 33-year-old fled to Hong Kong and was given political asylum in Russia after the US revoked his passport. He now leads a reclusive life there.

The documents he leaked revealed the extent of surveillance programmes run by the NSA and started a debate about privacy and the role of state security agencies which still rages today.

Stone was joined on stage at Comic-Con by cast members Zachary Quinto, Shailene Woodley and Joseph Gordon-Levitt — who plays Snowden and accompanied the director to Moscow to meet the exiled security contractor.

Gordon-Levitt describes Snowden as “very polite… almost an old-fashioned gentleman” who came across as warm and optimistic about how technology can strengthen democracy.

“We sat and talked for hours. It was interesting because I think most people that sit down and talk with him are approaching him from the position of politics,” the actor said.

“I was trying to get to know him on a different level because I can read about his politics. I wanted to understand who he was. We got to sit down and have a meal. I think you can tell a lot about a person by how they are when you sit and eat with them.”

Stone, a trenchant critic of the American political establishment, bought the movie rights to “The Snowden Files,” a chronicle of the affair by Luke Harding of Britain’s Guardian newspaper.

He also based his screenplay on political thriller “The Time of the Octopus” penned by Snowden’s Russian lawyer, Anatoly Kucherena.

The Moscow-based attorney told AFP in 2014 he had written the novel — which Stone likens to George Orwell’s 1984 — because he could not remain indifferent to his client’s ethical dilemma.

“I have become a witness to the moral paradox, so to speak. I have become imbued with his emotional state, he transported me into his world,” said Kucherena.

Gordon-Levitt believes comparisons of the NSA scandal with the totalitarianism Orwell wrote about might be missing a “more complicated and subtle” issue thrown up by the Snowden case.

“The question is that we are promised privacy in the constitution and if the government is going to change those rules, then they have to be open about that.

“That to me is actually even more important than the questions of privacy and mass surveillance in the Snowden story — the question of government transparency.”

Gordon-Levitt says he would welcome an open, public debate about whether mass surveillance of the population is a good idea, or even an affective bulwark against security threats.

“The problem was that decision wasn’t made out in the open. The rules were broken in secret, and then lied about,” he added.

Independent production company Open Road, which picked up a best film Oscar for “Spotlight” in February, agreed to distribute the movie in the United States, with its release scheduled for September 16.

Kabul in mourning after deadliest attack in 15 years