“Whoa,” remark­ed a teenag­e girl as she made her way into the hall where the openin­g ceremo­ny for the festiv­al.
By Saba Imtiaz
Published: February 6, 2011
Tweet Email 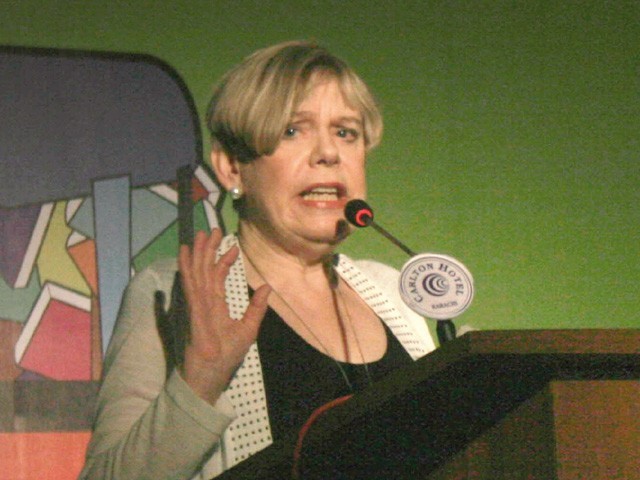 You know that all is not lost when eager readers turn up in the hundreds to witness a former nun open a literary festival. PHOTO: ATHAR KHAN/EXPRESS

KARACHI: “Whoa,” remarked a teenage girl as she made her way into the hall where the opening ceremony for the Karachi Literature Festival was being held. The two-day event kicked off on Saturday morning amid admonitions from Mashhood Rizvi, the director for Sindh and Balochistan at the British Council, for people to bring their cups of tea from the serving area and be seated.

“The British Council staff is very well trained,” quipped Rizvi. “If you need any assistance with putting your cell phones on silent, be it a Blackberry, Nokia, Sony Ericsson … our staff will be able to help you.”

Those who didn’t heed Rizvi’s repeated calls to be seated may have regretted it. In a short period of time, the hall was packed and people were sitting on the floor and spilling out of the hall and into the foyer. Pervez Hoodbhoy entered amid a crush of people rushing up to meet him.

Several of the panellists were at the ceremony, including Intizar Hussain, Ayesha Siddiqa, Zahid Hussain, Fahmida Riaz and former ambassador to the UK Maleeha Lodhi. Artist Shahnaz Ismail was spotted in a pair of truly Pakistani earrings — in the shape of a crescent and a star. Socialites carrying their Hermes handbags and stooped old men under Jinnah caps sat side by side with young students in school uniforms in the hall to hear speeches by Oxford University Press managing director Ameena Saiyid, who spoke about the history of publishing in Pakistan, US ambassador to Pakistan Cameron Munter’s wife Dr Marilyn Wyatt and British Council’s director of programmes Martin Fryer.

Fryer called the festival “a celebration of the written and spoken word” and believed that it was a space for writers to meet and for young writers to be introduced. Dr Wyatt spoke of her appreciation for Pakistani authors, having read the recent Granta issue that focused on Pakistanis. “Literature coming out of here is bewitching and exciting,” she said.

Keynote speaker Karen Armstrong is in Pakistan to launch a “movement for compassion”. She discussed at length how people can incorporate compassion, tolerance and kindness in their daily lives. “We are bound together closer than before,” she said in dulcet tones. “We cannot live without each other.”

However, even Armstrong was forced to acknowledge that building compassion was difficult. “We are addicted to and dependent on our prejudices,” she astutely remarked.

Her speech was followed by a performance called “Aaj Rang Hai” by students of Sheema Kirmani. Clad in white and accessorised with colourful dupattas, the dancers whirled on stage to thumping music.

As the guests spilled out into the courtyard to make their way to other sessions, the talk focused on the day’s events. While the sea breeze may have taken everyone’s minds off the daily grind, a young man couldn’t disconnect from the news. On spotting a foreigner, he remarked: “Look, Raymond Davis is here!”

Are Urdu readers a diminishing breed?