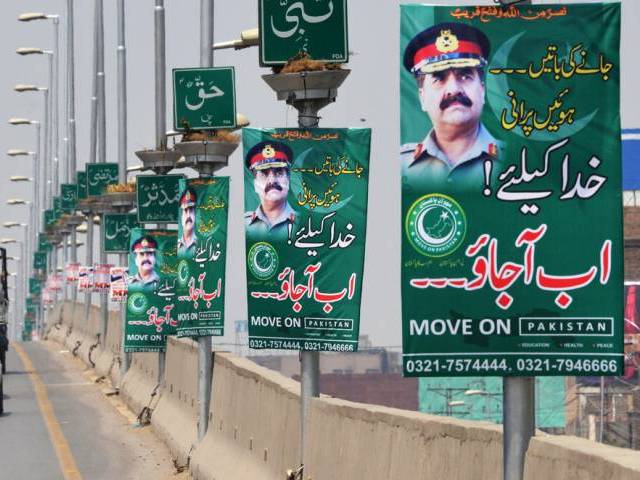 LAHORE: Police on Sunday registered a case against the head of a party behind the banners put up earlier this week across the country asking Army Chief General Raheel Sharif to ‘take over’ the power reins.

The Old Anarkali police registered the FIR against Move On Pakistan chairman Mian Kamran under sections 120-B (criminal conspiracy), 124-A (sedition), 505 (statements conducting to public mischief) and 34 (common intention) on the complaint of Mansab Ali Awan advocate on July 16.

The complainant said that the suspect by pasting posters on important roads of the city, including The Mall, has conspired against the government of Pakistan, adding he has incited public to revolt against a democratically elected government.

“By doing so, he has committed a serious offence against the state.”

The complainant demanded justice and action against the suspect in his complaint. A case under sedition charges has already been registered against the Move On Pakistan chairman in Faisalabad a few days ago.

The Old Anarkali police said the issue was under investigation.