Pakistan to observe black day over violence in Kashmir

Pakistan to observe black day over violence in Kashmir 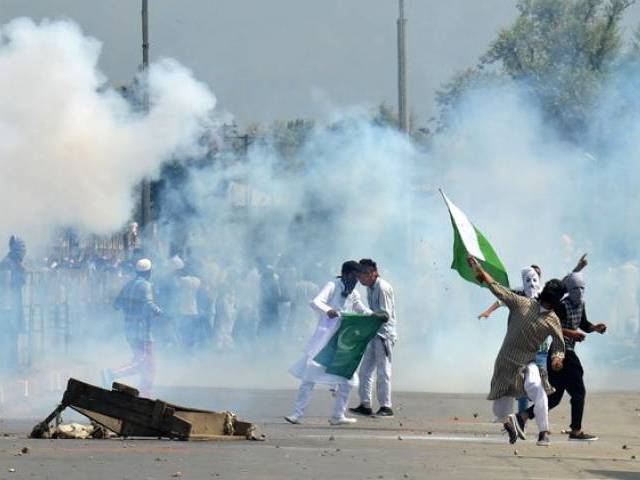 ISLAMABAD / LAHORE / NEWS DESK: Prime Minister Nawaz Sharif on Friday announced that Pakistan will observe a ‘black day’ on Tuesday, July 19, in light of “the worst outbreak of violence in Kashmir” which killed at least 34 people.

The premier chaired a special meeting of the federal cabinet at Governor House Lahore, where the deteriorating situation in Indian-occupied Kashmir (IOK) was discussed.

“I and entire Pakistan nation steadfastly stand by Kashmiris against Indian oppression,” he said, according to details of the meeting as given by the PM’s Office.

“Indian tyranny will only strengthen the freedom movement in Kashmir,” PM Nawaz told those in attendance.

“Kashmir will get freedom and Pakistan will continue to support the people of Kashmir against Indian occupation,” he added.

Nawaz asserted that even 0.7 million Indian security forces personnel could not repress Kashmiris.

“If Indian forces continue with the horrendous practice of killing innocent, it will be a bad omen for the peace of the region,” he warned.

The cabinet said that Pakistan would play its role in ‘awakening the conscience’ of international community.

All institutions of the country would highlight the tyranny of Indian security forces, being meted to innocent Kashmiris, the participants said.

Premier Nawaz further announced his decision to convene a joint session of parliament to discuss the ongoing violence in Indian-held Kashmir.

IOK imposed a curfew on Friday and blocked mobile phone services to stop people from gathering in the streets and stage violent protests over the killing of a young separatist commander Burhan Wani by security forces.

At least 34 people have been killed and 3,100 wounded, most of them in police firing, in the worst outbreak of violence in six years in the disputed territory. Pakistan strongly condemned Wani’s extrajudicial killing and has sought investigations into his and other civilians’ deaths in the disputed valley.

The foreign secretary told the Indian envoy that the use of excessive force against innocent civilians protesting peacefully over extrajudicial killings “is deplorable and a blatant violation of the right to life, right to freedom of expression and opinion, right to peaceful protest, right to peaceful assembly and other fundamental rights”, according to a statement issued by the Foreign Office.

Meanwhile, the Indian External Affairs Ministry said it rejects the decision adopted by the federal cabinet regarding the situation in Kashmir.

Our response to the special meeting of Cabinet of Pakistan today on recent developments in the Indian state of J&K pic.twitter.com/FcxlMUuwvF

“We are dismayed at the continued attempts by Pakistan to interfere in our internal matters,” said Foreign Affairs spokesperson Vikas Swarup in a statement on Friday.

The spokesperson went on to add that “continued glorification of terrorists belonging to proscribed terrorist organisations makes it amply clear where Pakistan’s sympathies continue to lie.”

More than half of Pakistan’s 8-year-olds cannot read: report