India has gone far beyond its previo­us record of gaggin­g voices in the valley­
By Baba Umar / Nighat Dad
Published: July 15, 2016
Tweet Email 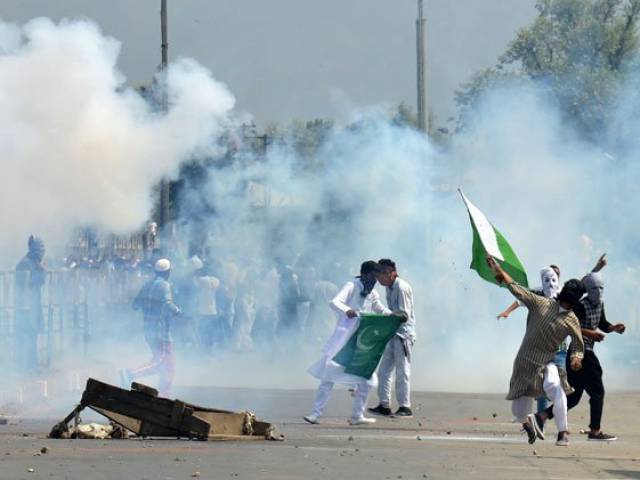 SRINAGAR: As it cracks down on dissent in Kashmir, India has gone far beyond its previous record of gagging voices in the valley.

Internet and cellular services have been suspended as hundreds of thousands of Indian soldiers patrol Kashmiri streets, shelling protesters with tear gas and pellets. Some 40 people have been killed and over 1,600 wounded in the unrest that began six days ago in response to the killing of 21-year-old rebel leader Burhan Wani.

Due to its reputation for skewed and slanted reporting, suspicion against Indian media runs deep in the Himalayan region. Indian journalists have been openly calling for suppressing unrest in Kashmir. Because of this, even those working for foreign and Kashmiri news outlets have been attacked by families of injured protesters inside hospitals. Indian soldiers, on the other hand, have been accused of beating up local journalists too in a bid to silence local voices.

It is in such a situation that alternative platforms, like social media, become crucial. But by continuing to block internet access, Indian authorities have prevented Kashmiris from that outlet too. Only a few – those who have the government-run BSNL Broadband landline connection – can access the internet, but even they can only do so with upsetting speed. Still, the digital blockade on Kashmir isn’t a new trend though. It was employed in 2008 and 2010 during massive anti-India protests when social media was new in the valley.

Exacerbating matters further, social media portals like Facebook have been accused of taking down content posted by Kashmiris regarding events unfolding in the region. Even some renowned voices were temporarily blocked and had their posts taken down by Facebook.

For instance, when Dr Dibyesh Anand opened his Facebook account yesterday, he was shocked to learn that his posts were removed ‘for violating community standards.’

“This is how Kashmiris experience everyday life. When those they consider heroes are killed, they are told to shut up because their heroes were terrorists for India. When they protest, they get killed. When they protest against those killings, more of them are killed. When they escape being killed and get injured and blinded because of indiscriminate firing, they are prevented from going to hospitals or monitored in hospitals too. All this in a country seen as the world’s largest democracy,” he reacted in an article later.

After Facebook lifted the suspension on another user – Mary Scully who is following the Kashmir situation keenly – she reacted: “Facebook is not exempt from the US Bill of Rights and cannot act like vigilantes for the Indian, Israeli, or US governments, taking out everything they don’t want known. Free speech is the essence of democracy and so is opposition to war, colonialism, and occupation.”

Scully added that while “Facebook has lifted my suspension for posting about the barbarous siege in Kashmir, there are dozens of Kashmiri activists and supporters still out in the cold, and the suspensions and censorship continue. That accompanies India’s lockdown on the internet and cell phone communication within Kashmir.”

Strong Kashmir voices like Dr Nitasha Kaul, Rayees Rasool, Khurram Parvez, David Akram and Huma Dar too faced their share of censorship amidst the deadly siege of Kashmir.  Facebook was also accused of taking down posts in Pakistan where users complained their posts were being pulled down. They reacted with the ‘#FacebookVsBurhanWani’ trend to the advantage of Twitter.

Facebook usually calls such posts emanating from or on Kashmir ‘unsuitable’ because of complaints. But the source of these complaints is never explained. Facebook’s standards and actions are only activated by complaints from users. This means Facebook acts only when a large number of complaints are received.

In Kashmir’s case, the plaintiffs are an army of ultra-nationalist overseas Indians with quick access to the internet. Thus the Facebook censorship of Kashmiris could be invoked merely by hecklers and trolls, rather than any genuine complaints. Last week, the UN Human Rights Council passed a resolution stating human rights apply online just as they do offline.

Meanwhile, this is how Kashmiri local Sameer Bhat, who regained phone access after six days, described the current situation in the region: “Banning is one of the easiest persuasions of democracy in Kashmir. The idea is to police your thought. Ergo Internet has been blocked in large parts of the valley. This is what India always does to make travesty of all democratic traditions in a place often hailed as its ‘inseparable limb’.

“The unvarnished truth is that the furor in our hearts is not some alienation with India or instigation from Pakistan. The stones and slogans and indignation and tempestuousness are not about some displeasure that Kashmiris harbour. It is a yearning, a slow burn, a thirst that won’t be slaked by a road here, or a package there. The current cycle of violence might even stop in a few days, weeks, but in reality its effects won’t taper off,” he went on to add.

(BABA UMAR IS AN INDEPENDENT KASHMIRI JOURNALIST. NIGHAT DAD IS THE FOUNDER OF THE DIGITAL RIGHTS FOUNDATION)