“Keepin­g such a person alive is a linger­ing danger for societ­y. [Kasab] is a menace for societ­y. He has no right...
By Tejas Mehta
Published: May 7, 2010
Tweet Email 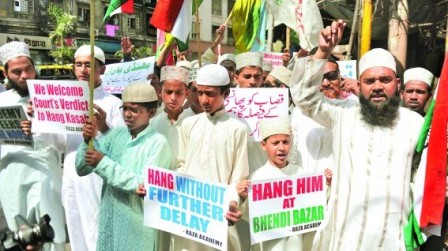 Muslims shout slogans during a rally in response to the sentencing of Ajmal Kasab in Mumbai. (AFP)

MUMBAI: “Keeping such a person alive is a lingering danger for society.

[Kasab] is a menace for society. He has no right to live.” These scathing observations were made by Indian judge M L Tahilyani while sentencing the primary suspect of the Mumbai attacks, Pakistani Ajmal Amir Kasab, to death. Having found Kasab guilty on Monday on most of the 86 charges levelled against him, the judge said that “undue sympathy will do more harm… and the court has no option but to give the death sentence as there is no chance he will reform himself.”

Kasab was awarded the capital punishment on five different counts – waging war against India, murder, abetment to murder, conspiring to murder and for committing a terrorist act. The judge said that Kasab had shown “extreme depravity” in firing indiscriminately at the Chhatrapati Shivaji Terminus, not sparing even women or children. “Brutality was writ large,” Tahiliyani said, “words cannot explain the brutality”. Tahilyani said the penalty was in proportion to the crime committed and Kasab had “lost the right of getting any humanitarian benefit.”

When Tahilyani read out the sentence to him, Kasab first simply nodded, indicating he had nothing to say. Then he broke down, tears rolling down his cheeks. The judge immediately asked Kasab to go and drink water. Spelling out other reasons for sending Kasab to the gallows, Tahilyani said Kasab had been under no duress to join the Lashkar-e-Taiba.

“He had voluntarily done so by going to the Lashkar’s office in Rawalpindi and offered to be a mujahideen. I don’t accept that the LeT influenced him.” Kasab’s lawyer K P Pawar had earlier insisted that his client’s age – 22 years – should be considered before pronouncing the penalty. But the judge did not buy this argument. “The attack was not only meticulously and systematically planned by using modern weapons, but measures were also taken to make the attack a success,” said Tahilyani.

Meanwhile, in the capital, the Indian government welcomed the judgement. “This is a message for Pakistan. They cannot meddle with the lives and property in India,” Union Law Minister Veerapa Moily said in New Delhi. India’s Minister for External Affairs, S M Krishna also warned Pakistan. “It sends a message that anyone who wages a war against India will be dealt with severely.” However, the execution of the death sentence will take a while as first the Bombay High Court will have to confirm the lower court’s judgement.

If the death penalty is upheld, then Kasab could appeal against the order in the Supreme Court of India. If that too fails, his last option will be to knock at the doors of the President of India with a mercy petition. AGENCIES ADD Meanwhile, Indian prosecutors plan to appeal against the acquittal of two Indian suspects, said India’s home minister on Thursday. “Of the three accused, one has been convicted and the death sentence given to him on four counts,” P. Chidambaram told the parliament.

“The prosecution has indicated that it will appeal against [the two Indians’] acquittal,” he said. Kasab was the only gunman caught alive after the 60-hour assault by 10 militants on luxury hotels, a railway station, a restaurant and a Jewish centre in Mumbai in November 2008. Families of the victims have long called for Kasab’s execution and the clamour for him to be sent to the gallows grew louder after the widely-expected guilty verdict. Kasab’s lawyer Pawar says he has not yet discussed a course of action with his client.

India wants Pakistan to convict the alleged masterminds of the assault from the banned Pakistan-based Islamist group Lashkar-e- Taiba (LeT). The group’s founder, Zakiur Rehman Lakhvi, and key operative Zarar Shah are currently on trial in Pakistan. India also blames Hafiz Saeed, head of the Jamaat-ud-Dawa charity, which is seen as a front for the LeT. BY SPECIAL ARRANGEMENT WITH NDTV