My two hours with the greatest man in Pakistan

My two hours with the greatest man in Pakistan

I don’t think any of us knew that Edhi has worked for humane causes in no less than 73 countr­ies
By Sarah Elahi
Published: July 13, 2016
Tweet Email 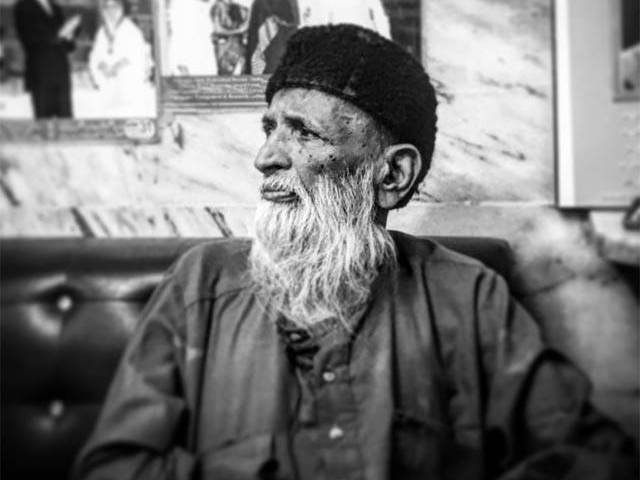 I don’t think any of us knew that Edhi has worked for humane causes in no less than 73 countries. PHOTO: HASSAAN KHAN/EXPRESS

The problem with being asked to describe two hours with the greatest man in Pakistan is that it is a bit impossible to do justice to. I was initially excited about the prospect of writing about my interview with Abdul Sattar Edhi. During our session, I made mental notes of all his inspiring quotes and decided I would focus on those alone. About ten minutes in I realised that picking just a few inspiring things he said would be even more difficult than describing him. So here is my sloppy attempt to explain what happened that day.

Nation unites in grief for Edhi

We just walked into the Edhi office in Mithadar. We had no precise address and no phone number we could reach easily, but this didn’t turn out to be a problem at all. Every single person we stopped in the congested streets knew where Edhi sahib’s office was and they were able to direct us so accurately that we arrived twenty minutes earlier for the interview. Nobody asked us why we were early or how long we planned to stay. We were ushered into a room decorated with posters from campaigns for a drug free Pakistan, a tolerant Pakistan and a compassionate Pakistan. Several honorary degrees were displayed under the glass top of a table we sat at (a table we later learned was “older than this country”). A large red sticker was on the door behind me. ‘LOVE HUMANITY’, it proclaimed in gaudy yellow lettering. I wondered at the man who had stuffed honorary PhDs under a glass top and chosen to frame and display a sticker like that. That’s all you can do with Edhi. Wonder.

I was nervous about meeting him. I’ve wanted to meet him since I was eight years old. I doubt there is a single man alive who commands as much respect, trust and gratitude as Abdul Sattar Edhi. Beggars, dacoits, philanthropists and society aunties alike feel safe depositing their zakat, their sadqas, their khairat, their earnings, their bread into his fund, knowing that it will reach whoever needs it most. Personally, I am not an especially spiritual person, but when I think of prayer I recall being nine years old and trying very hard to send blessings to the mysterious Edhi who seems to be keeping our country afloat singlehandedly. I don’t know what I expected of him on this day, but I did not expect him to walk into the room while we were all setting up our equipment and hearing him say “Assalam Alaikum” unassumingly, as if he wasn’t Edhi himself but simply a random person strolling into the room.

Once I had recovered from being tongue tied and begun the interview, I learned many things I didn’t know about Edhi, but many more I hadn’t realised about our society. I learnt that he describes himself as Sheikh Chilli (who never dreams small). I learnt that he despises maulanas who choose Islamism over humanity, but equally disparages those who despise criminals without understanding their motives. I learnt that his inspiration for placing a cradle outside every welfare centre was his experience of picking maggot-ridden babies out of the trash and seeing an illegitimate infant stoned outside a mosque. I learnt that he deeply loves his wife, doesn’t understand why people don’t choose to adopt daughters and employs mostly women because he believes they do God’s work better than men. I learnt he has met Gandhi and befriended Bacha Khan in his youth. More than anything, I learnt that nothing disgusts him more than people who see humans as anything but humans. “Insaniyat” is the only religion, he told us. I asked him what inspired him to start working for all of us the way he does. “I am a Muslim and I do what God has asked me to do. The only message of religion is that humanity is one. Nowadays, the world has become so big that we find ways to divide it up, but that’s what destroys us: divisions, divisions, divisions.”

I don’t think any of us knew that Edhi has worked for humane causes in no less than 73 countries. I don’t think any of us expected him to well up with sadness when he told us that India, the country of his birth, is one of the only two countries in the world that has denied him a visa for his work. That alone speaks volumes about who and what we are today; a world which denies the champion of transcending divisions a visa to cross the border.

I’m not sure what exactly it was that Edhi radiated in that room as we all sat and listened to him spellbound (until he woke me up with “Ask me more questions, are you tired already?”). It was like a sense of boundless possibility. If a man of almost ninety who started with nothing can run the world’s largest volunteer ambulance organisation, rescue 36,000 abandoned babies, feed the hungry every day, give every unclaimed body a decent burial, convince the most bloodthirsty amongst us to choose love over arms and build shelters where injured animals and birds are cared for, he can probably do anything. His humanity doesn’t know any bounds and in the face of all he has done, the photograph of a rather pompous ex-prime minister handing Edhi a small medal made me want to laugh. It was so grotesquely inadequate.

While even the most well-meaning of us execute our vision for humanity cynically, by crying ourselves hoarse about misgovernance, angrily criticising the idiots who don’t do a better job and howling with fury at the corruption and crime we face daily, there are others in Pakistan who achieve greatness with complete trust that people will choose to do the right thing.

Edhi recounted a time when he was accosted by bandits on his way to Quetta. They recognised him for who he was, safely escorted him to his destination and on his arrival, presented him with Rs20 million. Other hardened criminals have been known to put down their guns in the middle of street battles when the Edhi ambulance arrived on the scene. Beggars who spend their days collecting ten rupees at a time have dropped five hundred rupee notes into Edhi collection boxes. What is it about his personality that makes us want to keep on giving? “You call these people bandits, dacoits, thieves. But think about the society that has produced a system where some remain wealthy forever while others have to shoot for bread and then tell me who is wrong. If you’re letting this happen, tell me who the thief is.”

I suppose that’s the answer to my question. Here is a man who will give us everything, in fact who has already given us everything, simply because we are all human, whether we are criminals of one kind or another. It would be a challenge to find a single person in Pakistan who hasn’t been connected with the Edhi Foundation in some way. Everybody knows someone who has donated their money, called an ambulance, adopted a baby or had their Eid meat distributed by Edhi. There is a reason his number is pre-saved in the most basic models of cell phones under emergency contacts. The truth is that the only emergency threatening to destroy us is that we can’t distinguish this common thread of humanity and need that runs in all of us. We all give to and take from the Edhi Foundation. We all need his services and yet our principal activity is pointing fingers at who landed us in this mess. Divisions, divisions, divisions.