It is the first time in 26 years that deaths are taking place in protes­ts agains­t the killin­g of a milita­nt comman­der
By Shujaat Bukhari
Published: July 14, 2016
Tweet Email 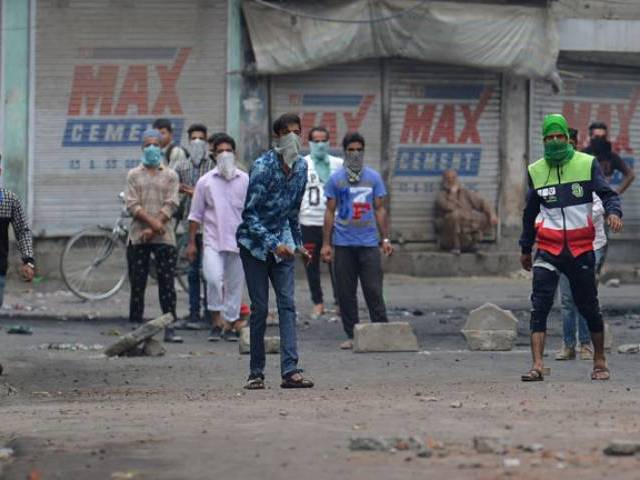 Kashmir is once again on the edge. By the time this piece is printed, 32 people have been killed in the fresh cycle of violence since July 9 – two of them drowned: a policeman pushed into a river by a mob and a young boy chased by police into the river.

Over 1,500 people have been injured, some of them battling critical wounds in hospitals. The main Srinagar hospital – Sri Maharaja Hari Singh Hospital – has declared emergency as the number of injured has been going up. Kashmir has been under curfew for four days and people are virtually locked inside their homes.

But the defiance of restrictions is defining a new mode of resistance. This time the protests have erupted not due to the death of a civilian, but a wanted commander of the Hizbul Mujahideen.

The killing of Kashmir militancy’s poster boy Burhan Wani has left a trail of death and destruction, perhaps not anticipated by the Peoples Democratic Party (PDP) and Bharatiya Janata Party (BJP) coalition government headed by Mehbooba Mufti, once known for her soft separatism.

The situation in Kashmir valley is grim and the death of 32 people – 30 of them at the hands of police and paramilitary force – has numbed the place. Some analysts, including former Kashmir chief minister Omar Abdullah, fear that a dead Burhan may prove more dangerous than a living one have started coming true.

In the last 26 years of conflict beginning with an armed rebellion against the Indian state, it is the first time deaths are taking place in protests against the killing of a militant commander.

In the recent past, Kashmir has seen uprisings in 2008 and 2010 that were equated with the Arab Spring and the Palestinian Intifida.

In 2008, the Amarnath land row triggered the uprising when then Governor SK Sinha allotted a huge chunk of forest land to Shri Amarnath Shrine Board (SASB), evoking a feeling of insecurity among Kashmiris, who had already been fighting against progressive political disempowerment.

The land row not only led to scores of deaths but deeply divided the two regions – Kashmir and Jammu – on communal lines. Record participation in assembly elections that followed in December 2008 also brought another layer of reality to the fore but that did not completely wash off the strong anti-India sentiment on the ground.

Only after two years, public anger raised its head again. The killing of three civilians in a fake encounter by the Indian Army in Kupwara district sparked off protests and with the killing of a young student Tufail Mattu on June 11, 2010, Kashmir was again up in flames.

With Omar Abdullah in command, public unrest taking the shape of a strong anti-India movement left 130 dead. The wounds were deep and it took many months to restore order. But the sentiment did not fritter away.

Omar did rule for the next four years but he had lost the real power. In 2014, people returned to the polling booths to elect a new government. As the mandate was deeply fractured and sealed the communal divide between the two regions, a new combination, termed as “meeting of North and South Pole” by former chief minister Mufti Muhammad Sayeed came up as a result of the PDP and BJP joining hands.

Kashmir had surely not voted for BJP to come into power but the PDP allying with a party seen as anti-Muslim and anti-Kashmir further contributed to the frustration of an average Kashmiri.

By the time PDP-BJP came into power, a sense of disenchantment had taken deep root in the Kashmiri society. Hanging of Afzal Guru, a convict in the 2001 parliament attack case, sent a strong signal to the Kashmiris that New Delhi did not care for their emotions.

(The writer is the editor of Rising Kashmir based in Srinagar)