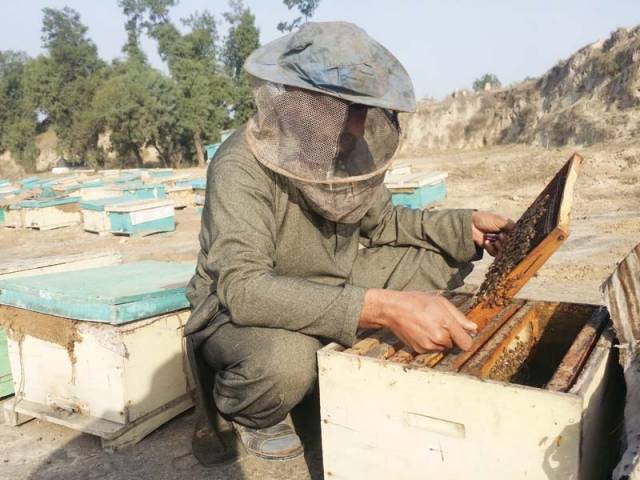 Adnan Ahmad inspects dying bees at his farm in the city. PHOTO: EXPRESS

PESHAWAR: The rising temperatures and erratic pattern of rains have led to a drastic decline in the population of honey bees in Khyber-Paktunkhwa. This has subsequently had deleterious consequences on revenue generation of the province since K-P is the leading exporter of honey. This change in weather has destroyed the livelihood of thousands of honey farmers.

The problem is grave since farmers are out of business in their own areas and cannot move to colder areas of the country to continue their trade since they have been banned from there.

Talking to The Express Tribune, small-scale honey farmer Adnan Ahmad who has lost half his farm since the beginning of this summer said, “The mortality rates of bees have become very high and it is difficult to sustain this business.” He added, “It is only now that this unfortunate thing has occurred because we are constantly changing our surroundings which is affecting every aspect of our lives.”

University of Peshawar (UoP) Zoology department head Dr Inayat Ali Shahjehan told The Express Tribune the temperature of beehive is always more than 40 degrees Celsius. “The ever-increasing temperature of the areas is very dangerous for honey bees and conservation measures need to be adopted to prevent loss of genetic diversity,” he said.

Shahjehan also said their studies indicate that environmental changes have a direct influence on the development, behaviour, physiology and distribution of honey bees. It also affects bees’ interaction with viral diseases which most farmers were unaware of. “Beekeepers are often uninformed about preventing these diseases,” he added.

There are 5,000 registered members of Pakistan Beekeepers Association who believe besides climatic changes, government policies and lack of interest on the part of authorities have prevented honey production to blossom as a full-fledged industry. “This is perhaps the only sector that earns a great deal for the country but is totally ignored,” Pakistan Beekeepers Association President Naeem Qasmi said.

He said earlier, honey was imported from Europe and Russia but Pakistan had been exporting honey for a long while now. “After Yemen, our honey is possibly of the highest quality.” Currently, farmers in K-P stick to four types of bees which they have bred from past generations. However, these bees are unable to resist climatic changes—heatwaves, untimely rains and water shortages—which have become prevalent in the region today.

Qasmi added farmers needed proper training so they could adapt themselves to climatic changes and continue their businesses. “Species of bees that are more resilient to climate changes must be bred,” he said.  “The Billion Tree Tsunami project will never benefit this sector because we have asked them to plant cider trees which are needed in the area,” Qasmi added.

Earlier, farmers used to take their farms to colder areas especially in Kashmir and Naran in Kaghan during summers. However, these areas which have an abundant supply of cider trees have imposed a ban on the entry of honey farms. After negotiation, the administration in Naran lifted the ban, however, it imposed a tax of Rs2,000 on each vehicle carrying honey farms.

“This is not fair but we have no other options,” Haji Imtiaz, an older member of Pakistan Beekeepers Association told The Express Tribune. He said the government of Azad Jammu and Kashmir was still reluctant to allow honey farms into the area. “The ban was imposed because of growing security concerns,” he said. Imtiaz said beekeepers were now required to register themselves with local police authorities. “Kashmir has a very large number of Palosa trees which guarantee honey production of the highest quality,” he added.

Basis of comparison: Terrorism dwindled in Khyber-Pakhtunkhwa from January to June