Karach­i-based café may be one of the better surpri­ses the city’s busies­t busine­ss street has to offer
By Hurmat Majid
Published: July 13, 2016
Tweet Email 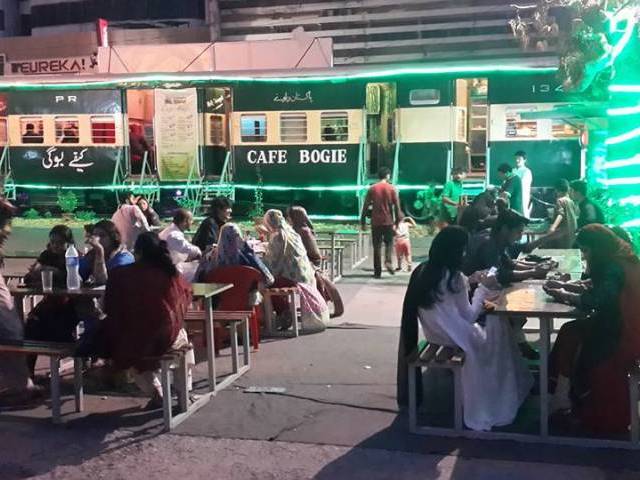 The Karachi-based café may be one of the better surprises the city’s busiest business street has to offer. PHOTO: CAFE BOGIE FACEBOOK PAGE

KARACHI: The misfortune of finding oneself stuck at Karachi’s II Chundhrigarh Road, particularly on a sunny afternoon, sounds quite awful. Under such circumstances, to stumble upon Café Bogie, hidden away in plain sight might turn out to be quite a pleasant surprise. Just walking through the cabin’s door would induce feelings of nostalgia for anyone who has travelled in a Pakistani train as the café is based out of a few railroad cars. With the capacity to seat 20 odd people in the carriages, the café also has outdoor seating for around 40 more people during the evenings.

Once the sense of nostalgia wears off, you may find yourself feeling a little panicked about the prospect of a meal in a cramped train carriage. The seats have plastic covers stamped with ‘PK’, showing from under the upholstery, and a sign painted above a mirror on the wall which reads ‘Sahiwaal’ (the name of one of the four-compartment café).

One can hardly expect a three Michelin star meal here. Once you are given the menu you can entertain yourself with a couple of hilarious typos on it, before being baffled by the choices in front of you,  ranging from Chicken Spin Rolls and garlic mushrooms for starters and a variety of pizza and pasta for the main course. When faced with the choice, I simply gave up and asked my server to recommend the most popular items on the menu. Taking his advice, I ordered the Bogie Sandwich in Dough and the Bogie Super Pizza.

As I had walked in after a busy lunch service, I had to wait for nearly half an hour for the food to be prepared from scratch. Left to my own devices with half an hour to kill I explored the rather small portion of cabin I was seated in. Intended as seating for two people, the cabin came with an old berth and a makeshift dining table. The top berth was stowed away against the wall, while a bracket fan wheezed away overhead. Even the window shutters were from a bygone era of Pakistan Railways.

The deep dish personal pan pizza was perfectly cooked with ample topping on it. There was great balance of flavour to be found with the right amount of mushrooms, olives, capsicum, onions and chicken in each bite. The distinct taste of dried oregano and basil and the fact the red sauce on the base was not ketchup was enough to call this a success. The chicken was tender and juicy and the cheese was stringy, even the tangy white sauce on top made sense in terms of taste. The crust was golden and crisp on the outside and soft and fluffy inside. Overall, priced at Rs200 the pizza was one of the best I’ve had at a local joint.

While I enjoyed the pizza, the baked sandwich arrived. It was basically a turnover in bread dough cut into sticks for the sake of convenience. This too was ‘garnished’ with the tangy white concoction, which started to taste a lot like home-made mayonnaise. However, the sandwich sticks did not need it and tasted much better without it. The fact that the crisp baked sandwich had a filling different than the pizza was another surprise. I had genuinely expected it to taste exactly like the pizza. It was spicier and had a lot of mushroom, chicken and cheese stuffing. The smokiness of the meat dominated the flavour profile while the desi spices accentuated it and there was just enough cheese to keep the inside of the sandwich moist without overpowering the dish. The dough was golden brown and well cooked. Even though the idea of calling it a sandwich does not make much sense, the taste and texture did. However, the serving size was too big for a starter and the sandwich could have been an affordable main priced at Rs350.

Phenome-Naan: A contemporary twist on a timeless classic

The tasting went so well I was tempted to order the chicken lasagna but the server politely apologised, saying it would take an hour to prepare the dish as the kitchen was out of lasagna servings and the dinner mise en place was underway. Slightly disappointed, I called for the bill and was quite surprised at the total cost of just Rs600 as the food ordered was enough for two people without any hidden tax deductions. When the server returned, he asked for feedback on the food and jotted all the suggestions down. The staff, overall, was polite and cared about the diner’s experience.

Not only does Café Bogie provide a unique authentic experience, which is a rarity in Karachi, it does it proudly in a part of the city where most people would not venture to solely for a meal. The fact it serves good food is an added bonus.

Verdict: Café Bogie is ideal for pizza lovers who want to top their meal with a bit of excitement.