Last year some 200 people were convic­ted for online posts with 43 of them senten­ced to jail
By AFP
Published: July 8, 2016
Tweet Email 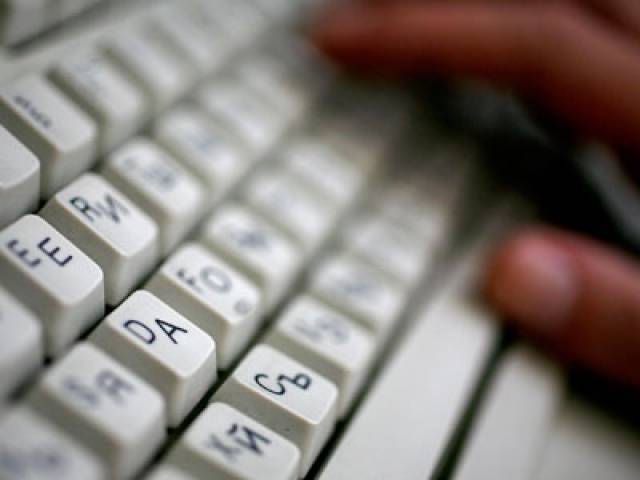 ithin a few months the 21-year-old was put on trial on charges of inciting hatred and sentenced to more than a year in jail. PHOTO: REUTERS

MOSCOW: Recent graduate Maxim Kormelitsky did not think twice when he shared a picture online with an expletive-ridden caption about Russian Orthodox believers and their tradition of jumping into freezing cold water.

But then he got a summons from investigators in his small Siberian hometown. Within a few months the 21-year-old was put on trial on charges of inciting hatred and sentenced to more than a year in jail.

The harsh punishment for Kormelitsky is part of a broader trend in Russia that has seen a small but growing number of people prosecuted for reposting messages online. For critics, this is a crackdown on the one place authorities don’t yet control — the internet.

Pakistan and Russia usher in new era of cooperation

“I think being tried for reposts — especially for ones like these, especially for real prison time — is complete and utter nonsense,” Kormelitsky, who is still free as he appeals his sentence, wrote to AFP.

The young man was denounced by local religious believers but he thinks officials singled him out because of his previous support for an opposition party.

Others who fell foul of the powers that be have been prosecuted under a vaguely defined law on “extremism” that rights defenders feel gives authorities far too much power.

Among them was Andrei Bubeyev, an electrician from the central Russian town of Tver.

Earlier this year he was sentenced to more than two years behind bars for sharing a picture of a tube of toothpaste with the inscription “Squeeze Russia out of yourself!”

Last year some 200 people were convicted for online posts with 43 of them sentenced to jail, according to the Sova Centre, a Moscow-based group that studies xenophobia and nationalism.

Most of the prison cases were for posts “aimed against the authorities and the President of Russia personally, Russia’s meddling in Ukraine’s affairs and calls for armed jihad”, the group said.

Rights activists have warned that this recent string of convictions could pave the way for a broader crackdown on online dissent.

“This example (Kormelitsky’s case) is sufficient to show that hundreds of thousands of people could be imprisoned,” veteran human rights activist Lev Ponomaryov told AFP.

And the proliferation of cases was meant to “scare people so they don’t criticise authorities and go onto the streets” in case the country’s current economic woes fuel discontent, he said.

As mass protests against a pro-Kremlin leader roiled Ukraine in early 2014, President Vladimir Putin approved a law that stepped up the potential penalties for statements online.

At the same time, authorities started invoking existing legislation on extremism — which critics says is so vaguely defined it can be easily abused — against those who expressed their disapproval of Moscow’s meddling in Ukraine.

The head of the Sova centre Alexander Verkhovsky thinks the current cases are not a deliberate attempt to imprison government opponents but part of a wider crackdown that dates back to the start of the Ukraine crisis.

The majority of prison sentences for extremism were against individuals with ties to far-right and extremist groups, he said, but some opposition activists have been caught in the mix.

Verkhovsky said he doubted Kormelitsky will serve his sentence, saying that only a small portion of online dissenters were actually imprisoned.

Nonetheless, the situation could be set to get worse.

Russia jets make ‘simulated attack’ passes near US destroyer: US

New legislation signed into law by Putin on Thursday in spite of wide-ranging criticism increases the maximum prison time from four to five years for inciting hatred online.

But even the few harsh punishments doled out so far seem to have been enough to frighten some internet users.

In Novosibirsk, activist Svetlana Kaverzina denounced herself to authorities after posting the same picture that saw Kormelitsky sentenced and is waiting to see if she will face charges.

Russia’s powerful Investigative Committee, the main national investigating authority, called her in this month “for a chat”, Kaverzina told AFP, to ask her about her attitudes toward the Orthodox Church, which enjoys a cosy relation with the state.

“I might understand if they gave you a fine or community service,” Kaverzina said. “But prison, criminal responsibility, that’s just out of line.”