Move comes after Naik's 'hate speech' is report­ed to have inspir­ed one of the five milita­nts involv­ed in Dhaka...
By News Desk
Published: July 7, 2016
Tweet Email 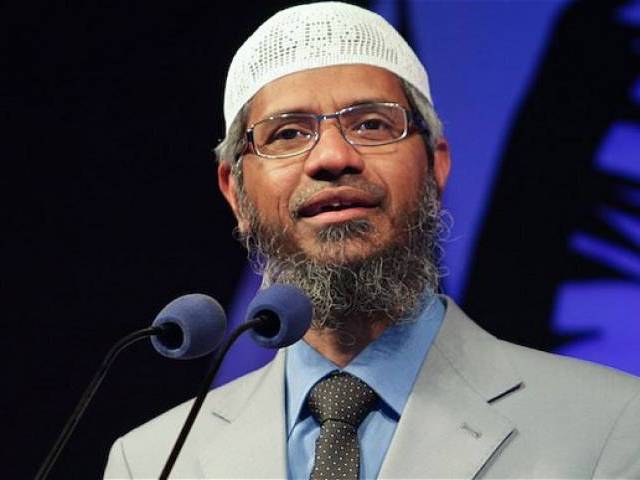 MUMBAI: Police have been deployed outside Mumbai office of a foundation run by Islamic scholar and preacher Zakir Naik, whose ‘hate speech’ is reported to have inspired one of the five Bangladeshi militants involved in the recent Dhaka carnage, Times of India reported on Thursday.

A senior Mumbai Police official said security personnel have been deployed outside Naik’s ‘Islamic Research Foundation’ office at Dongri area in South Mumbai, as a precautionary measure in the wake of the recent developments.

“We have neither received any threat perception nor particular instructions from the state or central government. We have deployed our forces only as a precautionary measure to avoid any untoward incident,” the official said.

He, however, parried question on whether Mumbai Police has received any particular information or instruction to share some inputs on Naik.

“There is nothing as such. This is something which is being handled at the state and central government level. But as a law enforcing agency, we are keeping a close eye on the situation,” the official said.

On Wednesday, union minister of state for home affairs Kiren Rijiju had told reporters in Delhi: “Zakir Naik’s speech is a matter of concern for us. Our agencies are working on this. But as a minister, I will not comment what action will be taken.”

Naik, in his lecture aired on Peace TV, an international Islamic channel, had reportedly “urged all Muslims to be terrorists”.

The Islamic orator and founder of Mumbai-based Islamic Research Foundation is banned in the UK and Canada for his ‘hate speech’ aimed at other religions. He is among 16 banned Islamic scholars in Malaysia.

He is known in Bangladesh through his Peace TV, although his preachings often demean other religions and even other Muslim sects, the report said.

Shiv Sena MP Arvind Sawant on Wednesday said he had written to the Union home minister, demanding a ban on Naik and Islamic Research Foundation, in the country’s interest.

Bangladesh has asked India to examine the speeches of Mumbai-based preacher Zakir Naik after reports that two of the seven terrorists who hacked to death 20 people at a Dhaka cafe last week were inspired by him, NDTV reported.

“Already there are certain complaints from the Maulanas of Bangladesh that his [Naik] teachings are not in line with the Quranic teachings and Hadith,” information minister Hasanul Haq Inu said on Wednesday.

“How much Naik’s teachings influenced the terrorists, that is to be investigated. We are investigating the whole matter,” he said.

Last week, gunmen stormed a popular restaurant in Dhaka’s diplomatic enclave and killed 22 people, most of them foreigners from Italy, Japan, India and the US in an attack claimed by the Islamic State.

Dr Naik, 50, has been on a religious trip to Makkah since Bangladesh was seared by the weekend’s attack.

In videos made available through his office in Mumbai, where the police has now stationed constables, the evangelist says he is “not shocked” that the Dhaka terrorists had cited him on the social media in recent posts.

“More than 90 per cent Bangladeshis know me, more than 50 per cent are my fans,” he says in English, stressing, “Every fan of mine may not follow everything I say.”

In the WhatsApp-ed video, he says, “I disagree that I inspired this act of killing innocent people”.