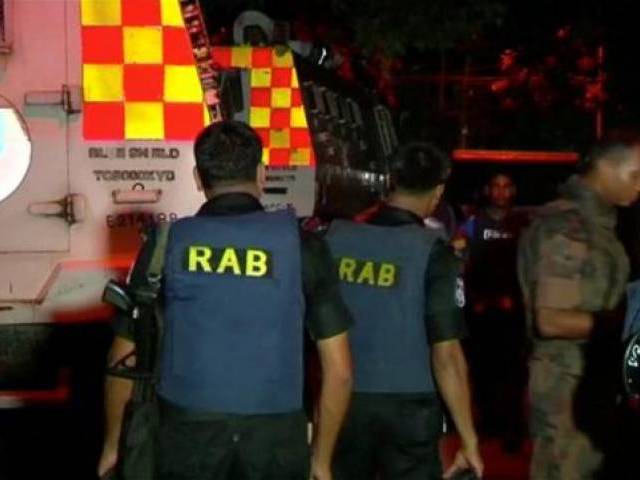 Members of the Rapid Action Battalion are seen outside the Holey Artisan restaurant, where gunmen had taken hostages, in the upscale Gulshan area of Dhaka, Bangladesh, July 2, 2016. PHOTO: REUTERS

Terming reports by Indian media as ‘fake’, Adviser to the Bangladesh Prime Minister on International Affairs Professor Gowher Rizvi assured Islamabad Dhaka did not blame Pakistan for the attack.

A letter to Islamabad on behalf of Rizvi in fact urged all countries, including Pakistan, to help Bangladesh in its fight against terror.

The Bangladesh High Commission in Islamabad issued a statement which quoted Rizvi as saying, “The statement issued by Indian media was ‘utter nonsense’ and that he has never issued any statement or spoken to any TV channel regarding the issue.”

“Professor Gowher Rizvi wanted me to convey this immediately to Islamabad so that there was no misunderstanding,” the letter read. “Hossain Toufique Imam is the political adviser to Sheikh Hasina, the prime minister of Bangladesh. HT Imam told NDTV that the manner in which the hostages, which included a 19-year-old Indian student Tarishi Jain, were killed with machetes suggests the role of a local terrorist group, the banned Jamaatul Mujahideen,” the report said.

Last week, armed militants had killed 20 civilians after taking them hostage in a Bangladesh cafe overnight and many of the victims were hacked to death, an army spokesperson said.

This Muslim victim refused to abandon his friends during Dhaka carnage

“We’ve recovered 20 bodies. Most them had been brutally hacked to death with sharp weapons,” Brigadier General Nayeem Ashfaq Chowdhury told reporters in Dhaka, without giving the nationality of the victims.

Thirteen survivors were also rescued at the end of the siege in an upmarket neighbourhood of the capital Dhaka, including three foreigners.

“Three of those who were rescued were foreigners, including one Japanese and two Sri Lankans,” said the spokesperson.

Meanwhile, Pakistan rejected on Monday allegations of involvement in the Dhaka terror episode as “baseless, irresponsible and provocative”.

In response to media queries regarding allegations of Pakistan’s involvement in the attack, FO spokesperson Nafees Zakaria stressed that “these are highly regrettable, irresponsible and provocative stories being carried in the Indian media. They are utterly baseless and unfounded. Pakistan strongly rejects such allegations.”

The spokesperson referred the media to the statement of adviser to Bangladeshi PM, refuting the Indian media story.

“Pakistan deeply appreciates Prof Gowher’s timely rebuttal to the Indian media’s reports. Pakistan has strongly condemned the terrorist attack in Dhaka and expressed solidarity with the government and the brotherly people of Bangladesh and offered condolences and sympathised with the families of the victims,” Zakaria said.

“Pakistan condemns terrorism in all its forms and manifestations. Being itself one of the biggest victims of terrorism, Pakistan welcomes Prof Gowher Rizvi’s call for international cooperation to fight the menace of terrorism,” he added.