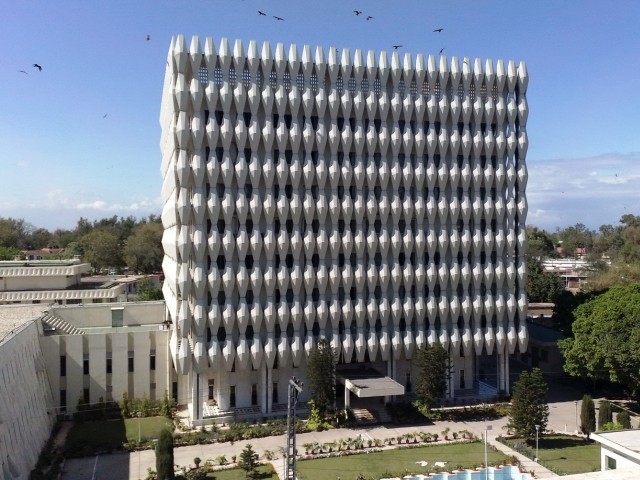 KARACHI: The State Bank of Pakistan (SBP) chided the government for “excessive budgetary borrowing, particularly from the central bank” because it is increasing overall demand and also diluting the effect of the measures to contain inflation, while revising its inflation estimate for the current fiscal year from 13.5-14.5 per cent to between 15 and 16 per cent.

The estimate, contained in the central bank’s State of the Economy report for the first quarter of the current fiscal, was released here on Wednesday.

High government expenses financed through borrowing from the central bank, a proposed reduction in energy subsidies and rising international prices of commodities have been cited as the reasons behind the higher rate of expected inflation.

All indices used for measuring price levels in the economy have registered increases in recent months. “Headline consumer price index (CPI) rose to a 17-month high of 15.7 per cent in September,” highlighted the report, adding: “Inflation measured by wholesale price index (WPI) and sensitive price index (SPI) also surged during the first four months of FY11.”

Major contributors to rising inflationary pressures in recent months include supply shortages of many perishable food commodities in the wake of recent floods, higher food and fuel prices and the reduction in energy subsidies.

Analysts have interpreted the report as a harbinger of further increases in the discount rate in the coming months.

Earlier on January 29, the central bank announced that the policy rate will remain at 14 per cent until the next review due in March. At that time, SBP Governor Shahid Kardar had warned that “the next policy decision will depend on the progress the government makes to cope with all the problems”.

The report said that in the context of rising inflation, “it becomes even more important for policy to ensure that demand-pull inflationary pressures are kept to a minimum”, hinting at a hike in policy rate in the upcoming policy announcement.

Growth of gross domestic product (GDP) is expected to remain between two and three per cent in the current fiscal. However this, too, appears largely dependent on the upcoming wheat harvest.

The report also highlighted that of the total sown area of 9.7 million hectares, where Kharif crops were planted, 2.4 million hectares had been damaged by heavy rains and floods. “Expectations of a recovery in agriculture will depend crucially on the wheat harvest and the livestock sector”. While the overall economy will remain hostage to power outages and expensive fuel, increased water availability is expected to help the economy’s mainstay, agriculture, the report went on to say.

Current account deficit is expected to worsen in the second half of the current fiscal, it said.

The central bank also forecast a strong growth in imports “will more than offset increases in exports and worker remittances”.

The SBP encouraged the government to follow structural adjustment programme prescribed by the International Monetary Fund (IMF), warning that while economic imbalances “are still quite manageable, further delays in implementing critical structural changes will significantly increase long-term risks to the economy”.