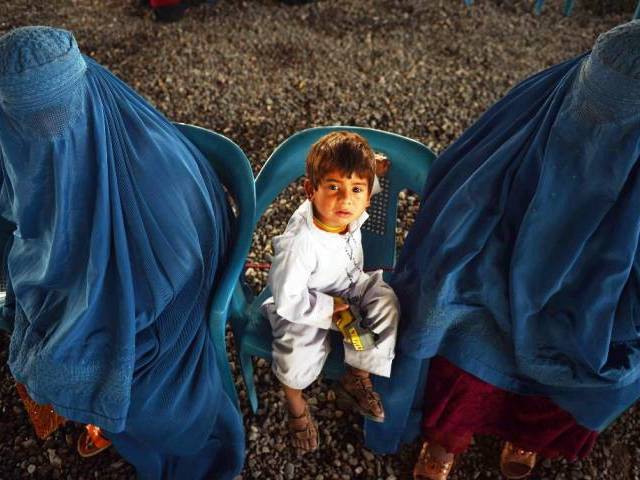 Tells Afghan newspaper he will not allow ‘harrassment’ of refugees. PHOTO: AFP/ FILE

In an interview with Kabul-based English language daily Afghanistan Times, the Pushtoonkhwa Milli Awami Party (PkMAP) chief directly said that “K-P belongs to Afghans and they can live there without fear and irritation”.

“I will not allow anyone to harass Afghan refugees in their own land… If Afghans are harassed in other parts of Pakistan, they should come to K-P where no one can ask them for refugee cards, because it also belongs to them,” the newspaper quoted him as saying.

Talking about recent skirmishes between Pakistani and Afghan security forces at the Torkham border crossing, Achakzai said: “Kabul and Islamabad should exercise extreme caution to resolve the conflict.”

“Otherwise, they [Pakistan and Afghanistan] should leave the issue to the United States and China, which will resolve it within two weeks.”

“Torkham and forced repatriation of Afghan refugees are two separate issues. It not only raised concerns among Afghan officials in Afghanistan, but also made Pashtun leaders concerned here,” the PkMAP chief also claimed in the interview.

Afghan troops opened fire on Pakistani security officials earlier this month when Islamabad started building a gate well inside its side of the border at Torkham. The clashes resulted in casualties on both sides. Pakistan and Afghanistan have now declared a ceasefire and have agreed to constitute a bilateral mechanism for discussion of issues related to border management.

Achakzai’s comments drew anger and derision in Pakistan. Lashing out at his remarks, K-P Chief Minister Pervaiz Khattak said the PkMAP chief has ‘humiliated all Pakistanis’.

“The people of K-P gave their verdict in favour of Pakistan, not Afghanistan, in 1947,” Khattak said in a statement issued on Thursday. “Does Mehmood Khan Achakzai still envision a Pakistan without K-P?” he asked.

The chief minister added that the people of K-P “are united and reject Achakzai’s claims.”

Senior Pakistan Tehreek-e-Insaf leader and former K-P minister Shaukat Yousafzai also expressed annoyance with Achakzai, telling the PkMAP chief to “move to Afghanistan if he has such love for that country.”

As Achakzai’s remarks sparked condemnation in Pakistan, he issued a clarification on Thursday and claimed the Afghan media had taken his words out of context.

He insisted that he had been referring to K-P’s historic background before the Durand Line agreement and did not say the province belonged to Afghans.