Police also detain­ed Saleem Chanda, who was travel­ling with him when gunmen target­ed his car
By Our Correspondent
Published: June 26, 2016
Tweet Email 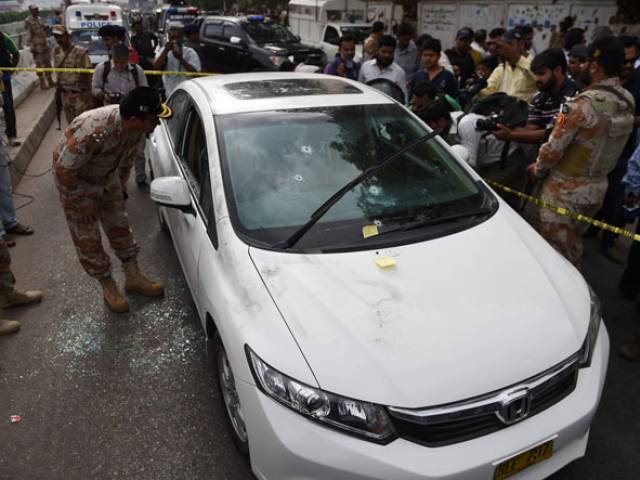 security officials gather around the bullet-riddled car of Qawwali maestro Amjad Sabri who was killed in an attack by unknown gunmen in Karachi on June 22, 2016.PHOTO: AFP

KARACHI: Investigators claim to have made a major breakthrough in their probe into the targeted killing of acclaimed Sufi singer and qawwali maestro Amjad Sabri as police detained a close aide of the slain qawwal for questioning on Saturday.

Sabri was shot dead by two motorcycle-borne gunmen, hardly a kilometre away from his home in the Liaquatabad neighbourhood of Karachi on Wednesday. Law enforcers, including Rangers and police, have rounded up more than 100 suspects, including workers of a political party, in a citywide swoop.

Investigators say they have detained a suspect with alleged links to Sabri’s killers. “We’ve made a major breakthrough in investigations. We will give good news soon,” a senior police official privy to investigations told The Express Tribune.

Police also detained Saleem Chanda, a closed aide of the late qawwal who travelling with him when the gunmen targeted his car. “Being a closed aide of Sabri, Chanda knew about all of his activities. The killers did not fire at him even though he was sitting next to Sabri,” said SHO Mohsin Zaidi. “Chanda might have investigators.”

Meanwhile, authorities asked law enforcement and intelligence agencies to name representatives for joint interrogation teams (JITs) being set up to investigate the killing of Amjad Sabri and kidnapping of Barrister Awais Ali Shah, the son of Sindh High Court’s chief justice. “Though the Sindh government has approved the summary for constituting JITs, we have asked the ISI, MI, IB, FIA, Rangers and others to name their representatives so that the JIT could be formed,” said a source in the Sindh Home Department.

In a related development, leading artistes approached police on Friday seeking of security, saying they were feeling insecure in a city where acclaimed Sufi singer Amjad Sabri was gunned down in broad daylight. However, police expressed their inability to provide security to each and every person belonging to the showbiz industry. The Karachi police have already been facing a massive shortage of workforce. More than 8,000 policemen have been performing VIP duties in Karachi.