Sell ice blocks as there is no electr­icity; move will impact agricu­lture
By Muhkamuddin
Published: June 25, 2016
Tweet Email 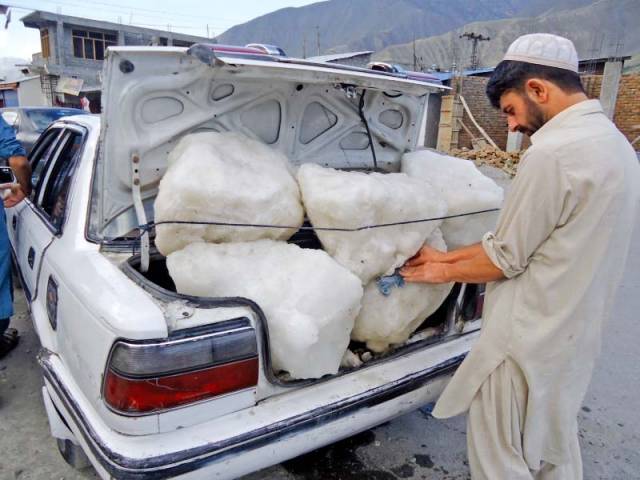 A man takes out pieces of melted ice glaciers from the peak of Trich Mir to Chitral city. PHOTOS: EXPRESS

CHITRAL: The melting of glaciers in Chitral is a creeping threat. However, their extinction is also likely to have long-term environmental hazards on the region as the glaciers irrigate land in the region. The fears have risen as an electricity shortage has compelled people to use ice glaciers.

Since floods have damaged Reshun hydel power station, locals have no option but to take ice blocks from glaciers in Chitral to obtain drinking water on summer days.

Every day, glaciers are broken down into blocks of ice, loaded in on vehicles from the well-known peak of Tirich Mir and transported to Chitral city where they are sold in the markets. The demand is such that thousands of people are now affiliated with the business and are coining money out of it.

In times of need

Ice from glaciers became a commodity in Chitral with the shortage of electricity, therefore, to save locals from the heat, the business-minded ones cashed in on the situation. The ice blocks started being taken from Lowari Top eight years back.

However, where there is money involved, conflict makes a beeline into the equation. When people of Ashrait, a village near Lowari, saw ice-selling helping people make profit, they claimed a glacier on Lowari’s main Chitral-Peshawar Road to be their property. The Ashrait residents started bidding on the glacier. Now every year, a bidding of millions of rupees is called – whoever bids the highest gets the glacier. After that, businessmen buy ice blocks from the bidders and sell them in the market.

After Lowari, now the business has also started in Tirich Mir. As per an estimate, every day 50 to 60 jeeps are loaded with ice blocks from glaciers in Tirich Mir and sold in different places such as Torkhow, Mulkhow, Booni, Reshun, Chitral city, Ayun and Drosh.

Tirich Mir glaciers are more popular and liked by the public since they are cleaner and softer as compared to Lowari Top’s glaciers.

The ice loaded out a single vehicle is sold for Rs12,000 to Rs15,000, driver of a vehicle, Sharif Ahmed, said while talking to The Express News. He said it gives good money but they also have to pay for fuel.

As lucrative as the business sounds, it has hazardous long-term effects for not only Chitral but other areas of Khyber-Pakhtunkhwa as well as the glaciers, when melt, irrigate lands in the district and other areas, even some lands of Afghanistan through Kabul River.

When the selling of ice from glaciers started from Maltikhor on Lowari Top, the area used to be covered with glaciers, but presently this business has left no traces of glaciers in Maltikhor.

The sale of ice from glaciers has dried up several waterfalls.

If hydel power plants are not built to meet the requirements of locals, they will eat away on the glaciers in no time, leaving the country to face a severe water shortage in the years to come.

While talking to The Express News, the regional director of Focus Humanitarian Assistance expressed grave concerns over the situation.  He said glaciers are used to harvest crops but with the sale of ice from it, reservoirs will be negatively impacted and Chitral will run dry.

A geologist from the same organisation also reiterated the views. He added glaciers gradually melt naturally, but if the water reservoir that could last for a month is consumed in a day, then it indicates a disaster.

However, locals continue to use the glaciers despite growing concerns.