Indian cricke­ter Sachin Tendul­kar has joined Twitte­r and there are alread­y plans in place to make him the bigges­t star...
By Maha Amin
Published: May 6, 2010
Tweet Email 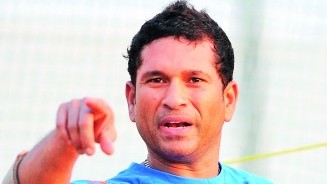 KARACHI: Indian cricketer Sachin Tendulkar has joined Twitter and there are already plans in place to make him the biggest star on the website.

A number of celebrities have accounts on social networking and micro-blogging sites. Twitter is home to celebrities from all over the globe, Pakistani celebrities such as Ali Zafar and Atif Aslam have accounts, Indian director Karan Johar is an active tweeter and Hollywood superstar Ashton Kutcher has the most followers on Twitter. Now Indian cricketer Sachin Tendulkar has joined their ranks.

Tendulkar was ‘welcomed’ on the website by a number of Indian celebrities including Bollywood actor and host Shilpa Shetty, who believes that the cricketer joining Twitter is cause for celebration. Tendulkar said he joined because he was told that someone was masquerading as him on Twitter, and was giving his opinion on various matches. Tendulkar thought this was unfair as it was misleading people.

Tendulkar, who is said to be reserved and private, is getting used to tweeting and is determined to strike a balance between his private and public life. India’s Mid Day newspaper was very excited that Tendulkar joined Twitter and has started a campaign which aims for Tendulkar to have the most followers on the network. On the website mid-day. com the newspaper has posted “We at the Mid Day think he (Tendulkar) should be the biggest star on the social networking platform. Ashton Kucher, Hollywood poster boy, is the world’s number one tweeter.

Mid Day wants Sachin Tendulkar to beat him. We need your support.” Hollywood actor Kutcher beat CNN to become the first Twitter user to reach one million followers. He challenged CNN to a race on Twitter to see who could reach one million followers first. The young star won and used his fame for a good cause; by donating 10,000 anti-malaria bed nets through Malaria No More.

Now Mid Day has started a new campaign to promote Tendulkar and although the ace cricketer joined the network on May 5, 2010 he has a population of one billion rooting for him. Beating the one million target should not be too difficult.