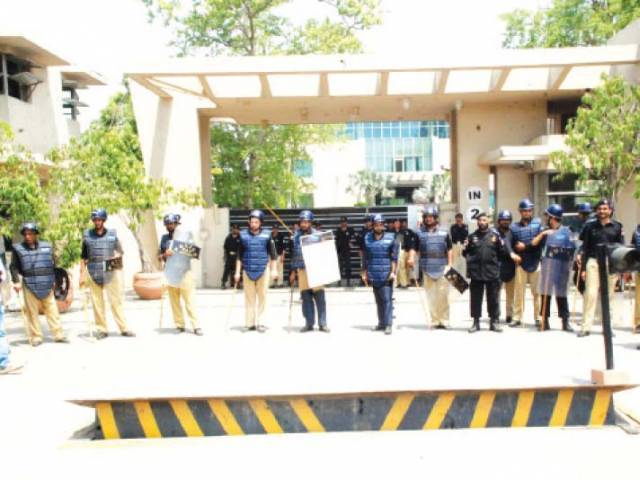 Policemen guard the club during a protest by its employees. PHOTO: ABID NAWAZ/EXPRESS

“We have terminated the contract with immediate effect and taken over the club. We have informed the current management about cancellation of the contract,” Rafiq told a press conference. “We are aware that a case is pending in the Supreme Court of Pakistan but the club management has defaulted on payments… the action is totally legal,” the minister said.

Rafiq said terms of the lease had been manipulated. “Tenders were originally floated for the lease of 103 acres for 33 years… instead it turned out to be 140 acres and a 49-year lease,” he said. He said the club management had been paying only Rs2.16 million annually to the railway management rather than the agreed Rs21.6 million.

The management had not paid rents and shared revenue for several years, he said. “The 10 per cent revenue sharing with Pakistan Railways did not include food and beverages profits,” Rafiq said, “They have also established cinemas and marquees without permission.”

The minister said the club would initially be managed by Railway Estate Development and Marketing Company. “Eventually, its management will be awarded to another party through an open tender.”

The deal regarding leasing the railway land to a private company for establishing a golf course and a club has been in the news for many years. A case is pending with the Supreme Court following Senator Ishaq Khakwani’s alleging manipulation of lease terms.

He denied Rafiq’s claim regarding manipulation of lease terms saying that the National Accountability Bureau had already investigated the allegations. “A report has already been submitted to the Supreme Court,” he said.

“How can railways use their police to seal the premises without intimating the club management and the local police when a case is pending in the Supreme Court and in a civil court?” he said.

Sheikh said Pakistan Railways could not terminate the contract unilaterally. “The railway management has committed contempt of court by terminating the agreement,” he said.

Around 1,000 employees of the club staged a protest demonstration in front of the club and blocked the Canal Road against the take over.

Several members of the club The Express Tribune spoke to said they were against the take over.

“How can the government operate a community club and a golf course when it has been unable to streamline its own departments and issues? How will Pakistan Railways manage the club when it can hardly manage its trains,” said Mian Bilal Hanif, one of the members. “I now have a sense of insecurity with regard to my membership, the policy and future course of action,” he said.