Offici­als from both sides blame each other for starti­ng the exchan­ge of fire on the border.
By AFP
Published: February 3, 2011
Tweet Email 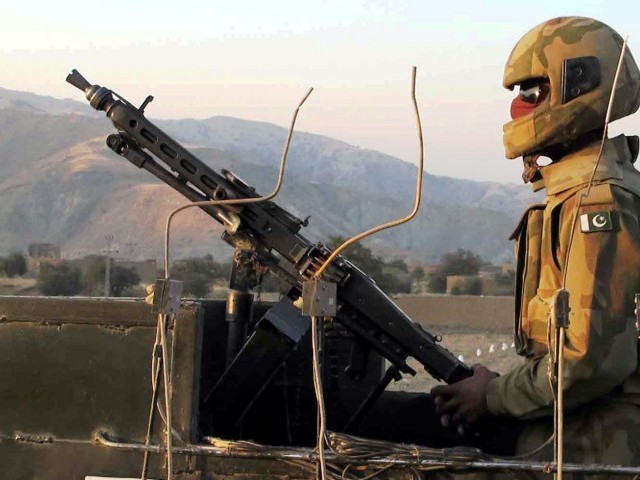 One soldier died and three were injured in exchange of fire with Afghan forces. PHOTO: EPA/FILE

Afghan and Pakistani troops exchanged fire across the border on Wednesday, said officials, blaming each other for provoking the incident that left one Pakistani soldier dead.

A border police commander in Afghanistan’s eastern province of Khost confirmed the exchange of fire and accused Pakistan of sparking the battle.

“At around 11 am today, Pakistani troops in Waziristan started firing heavy and light weapons towards police posts in Gurbuz district. Our soldiers returned fire,” the official said.

“Their attack was completely unprovoked and without reason. The fighting is still continuing, there haven’t been casualties on our side,” he added.

However, a senior military official in Peshawar said that one Pakistani soldier had been killed and three wounded.

“Afghan forces fired several mortar shells on one of our military checkposts, leaving one soldier dead and injuring three others. We fired in retaliation. Our troops are using artillery and mortars,” the official said.

“We’re receiving fire from Tangrai checkpost in the Afghan province of Khost. The Afghan army is in that checkpost,” one of them said. “We are responding with artillery and mortars,” he added.

Afghanistan and Pakistan trade routine recriminations on border security, accusing each other of allowing militants to infiltrate the porous and mountainous border to carry out attacks.