Every Pakistani owes over Rs57,000 in debt

Every Pakistani owes over Rs57,000 in debt 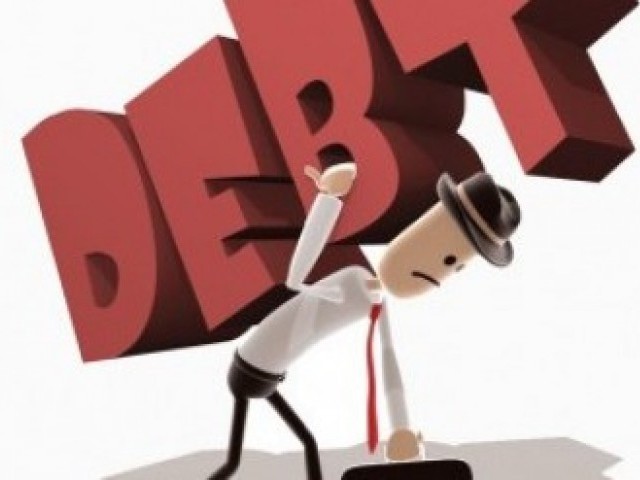 ISLAMABAD: Every Pakistani man, woman and child owes over Rs57,000 to foreign and domestic lenders, which is approximately Rs22,000 more than the per head level when the current government took over.

Only this year, almost Rs900 billion will be consumed to service the huge debt stock, which is five times more than the revised federal development budget.

According to the Debt Policy Statement, for the first time in Pakistan’s history, the country’s total debt and liabilities touched the Rs10 trillion-mark in September 2010. The federal government has borrowed over Rs5 trillion from domestic sources and approximately the same amount from international lenders. According to the Federal Bureau of Statistics’ “population clock” as of February 1, the country’s total registered population was 175 million, which means each individual owes up to Rs57,057.

As of June 30, 2008, Pakistan’s total public debt stood slightly over Rs6 trillion that amounted to Rs34,500 per Pakistani (at present population). But, during its two-and-a-half-year tenure, the Pakistan Peoples Party-led government has added Rs3.5 trillion (excluding liabilities) to the total debt stock. Including liabilities, the difference comes to Rs4 trillion, which is much more than this year’s total national budget, according to official papers.

In the last financial year, the current government has added another Rs1.3 trillion to the debt stock, excluding liabilities. As of June 2010, total public debt (excluding liabilities) stood at Rs8.9 trillion. The debt statement shows that the government borrowed Rs798 billion from domestic sources and Rs189 billion from external sources to finance fiscal operations in just one year. Additionally, the government borrowed Rs271 billion from the International Monetary Fund for balance of payments support and, because of the rupee-to-dollar depreciation, Rs200 billion were added to the debt stock without borrowing a dollar.

The Debt Office warns that inappropriate debt structure could become a source of vulnerability to the real economy and financial system of Pakistan. It cautions that low-cost foreign currency denominated debt is the biggest risk due to an unexpected currency shock. On the other hand, heavy reliance on domestic debt may crowd out private sector credit demand besides pumping inflationary expectations.

The government has also violated an act of the parliament while aggressively borrowing to meet its expenditures. The Fiscal Responsibility and Debt Limitation Act 2005 requires the federal government to reduce public debt and maintain it within prudent limits. But, the government has violated the act on various accounts. The legislation bounds the government to reduce revenue deficit to nil-zero gap between revenues and current expenditure and maintain it in surplus. However, according to the debt statement, instead of maintaining surplus, revenue deficit was approximately 2.1 per cent of the total size of the economy.

The government also violated the act on account of reducing the debt stock by 2.5 per cent of the total size of the economy and instead added almost another one per cent to the debt stock during the last financial year.