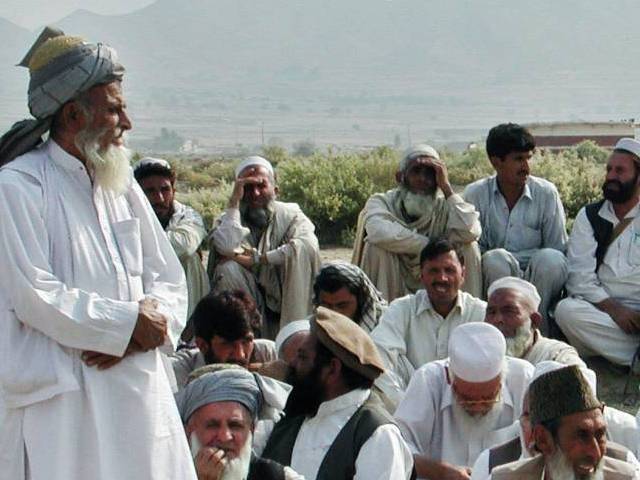 PESHAWAR: The federal government is all set to introduce the Nizam-e-Adl Act 2016, a proposed legal framework which will repeal the Frontier Crimes Regulation (FCR) 1901 and extend jurisdiction of the superior courts to the Federally Administered Tribal Area (Fata).

A copy of the proposed act, available with The Express Tribune, shows a unique amalgam of the Code of Civil Procedure 1908, Code of Criminal Procedure 1898 and Rewaj – the customs, traditions and usages of tribes in Fata.

According to the proposed act, the district and session judge appointed by the federal government in consultation with the high court will be referred to as the Qazi, who will be aided by a Jirga – a council of elders, with four or more members appointed by the Qazi.

“It’s a clear indication that the inclination of the committee to decide the future of Fata is to merge it with Khyber-Pakhtunkhwa even though the report of the committee is not official as yet,” a senior official involved in the proceedings told The Express Tribune.

The act will be extended to the areas of Fata as mentioned in the first schedule that describes the territory under the Constitution of Pakistan.

“Even though mainstreaming Fata is a larger project that will take up to 5 years as recommended by the committee,” explained the official, “as a starting point, the legal framework can be extended to the urbanised units of all seven tribal areas and the adjoining frontier regions.” There are 23 urban localities currently in the tribal areas.

Under both the civil and criminal lawsuits, the Qazi has been asked to adopt such procedures which will facilitate compliance and justice done in accordance with the Rewaj. An aggrieved party by an application to the court shall seek a decision on the basis of the Rewaj.

Any reference to the police station will be considered synonymous to the Levies or Khasadar force.

Upon receiving an application, the Qazi will constitute a committee of elders within seven days. Any objection to a person included in the council of elders will have to be notified within a period of three days. This objection will be addressed by the Qazi within a span of another four days.

The council of elders is bound to submit its report to the Qazi within a period of 30 days.

Upon the decision of Jirga, the Qazi will either pass a decree based on their findings or if the decision is not unanimous will ask the council of elders to review it within a period of another 30 days. The decision of the court will be implemented by the political agent.

While the Supreme Court and the PHC’s jurisdiction will be extended to Fata, the high court may transfer any case to any Qazi after an application is submitted by the aggrieved party within seven days of the formation of the council of elders.

Living in the shadow of the Frontier Crimes Regulations

However, the political agent has been given the authority that under exceptional circumstances – if recommended by the Qaumi Jirga – respectable elders of tribes as described in the act, might refer any case to the court for justice and public peace.

An appeal against a decision can be filed in the High Court within 30 days of any decree or sentence passed. The rules of procedure for the implementation of the Nizam-e-Adl Act 2016 have been tasked to the K-P Governor Iqbal Zafar Jhagra.

The last Nizam-e-Adl regulation was passed in 2009 in Malakand at the height of the conflict. When the official involved in the legislation was asked if the law was prepared keeping the case of Swat in sight, he did not deny. The Minister of States for Frontier Regions (Safron) Abdul Qadir Baloch was not immediately available for comments.