Effici­ent manage­ment of the Afghan border is the next critic­al stage of Operat­ion Zarb-e-Azab
By Muhammad Ali Ehsan
Published: June 22, 2016
Tweet Email 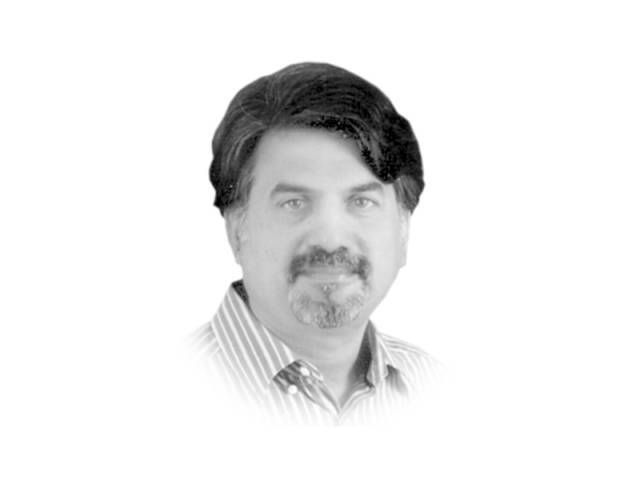 This didn’t just happen suddenly. Improving and augmenting border-crossing arrangements, such as construction of a gate within one’s side of the border, is not something that should have provoked a violent response from the other side, but that is exactly what happened at the Torkham border recently. If Afghanistan has made a hard choice of creating a tactical military stand-off with Pakistan at Torkham, is it with a definite purpose? The purpose, it seems, is to remind Pakistan in a military language that if its next big aim is efficient border management at the Pak-Afghan border, then it is not something that Pakistan can unilaterally go ahead and execute.

Border management will surely address Pakistan’s security concerns but would it address the concerns of the people of Afghanistan? Eleven out of the 34 provinces of Afghanistan share a border with Pakistan on a 2,600km front. There are 27 villages (17 in Balochistan and the other 10 in Khyber-Pakhtunkhwa) that are spread right over the border with people living on both sides of the divide. To many people in these villages, being a part of Pakistan or Afghanistan has hardly ever mattered — but not for long. And it is this concern and the daily movement of a huge number of people from Afghanistan to Pakistan — some of whom are visiting families, others who come for business and some even to seek better medical attention — which is likely to be curtailed now that has put the Afghan government in a difficult position.

Not to be forgotten, a whopping 87 per cent of the world’s opium is grown in Afghanistan according to the UN Office on Drugs and Crime 2014 Report. According to the same report, there are anywhere between 300 and 500 heroin-producing factories operating in Afghanistan, mostly located in the provinces of Helmand and Nimroz near the border with Pakistan. The report also estimates that $4 billion in cross-border trade is being carried out by drug traffickers, a quarter of which goes to the many government officials, Afghan security force officials and warlords. Considering this, is the continuity of the drug trade not a good enough reason to prevent any sort of efficient border management by Pakistan? At the zero point, there is no presence of the anti-narcotics department on the Pakistani side. Should its presence at border crossings like Torkham not become part of efficient border management as well?

Living across the border divide, the real life issues of neighbourhoods and ethnic relations are deep-seated between the people of the two countries. They have been ethnically merged for a very long time and had been living in harmony before some trigger-happy border security personnel resorted to unprovoked firing resulting in the death of a serving Pakistan Army major and injury to some of our soldiers. After this incident, I have heard many people suggesting that the time for us to act as good neighbours is maybe over and that the refugees should be immediately repatriated because Afghanistan, at best, has been unappreciative of what Pakistan has been doing for it for years.

Refugees are never welcomed by host countries. An illustration of this is the exodus of Syrian refugees and the unwelcome response they have received in Europe. The hardships that the Syrian refugees face today are the same hardships that the Afghan refugees faced when they left their war-torn country and moved into Pakistan in the 1980s. Unlike the treatment meted out to Syrian refugees by some European countries, however, we welcomed the Afghan refugees with open arms. The world credited us for hosting the largest number of refugees globally. Are we going to pour cold water on all that good work? Nobody in Pakistan can disagree with the need of an efficient border management plan considering the terrorist threat that unchecked movement from across the Afghan border poses to our security. However, we must find a way of doing this without alienating the Afghan government. We have to try and get it on board to implement a border control system that should be mutually beneficial for both countries.

Operation Zarb-e-Azab in Fata has almost reached the culmination point and the next big challenge of the military is to ensure that terrorists that have been pushed over the Pak-Afghan border don’t return and launch attacks inside Pakistan. To achieve this, there is no other way but to find means to efficiently manage the 2,600km porous Pak-Afghan border.

Given that Torkham is the busiest of the border crossings — between 5,000 and 30,000 people cross it on either side on a given day and 1,000 to 1,200 cargo vehicles also cross in either direction — it was but natural for it to pop up on the top of the fix-it list for the military. Tighter verification procedures of visas and passports, introduction of biometric machines, FIA establishing arrival and departure booths, introduction of passport scanning machines, inspecting cargo vehicles and placing a master computer connected with NADRA and the interior ministry’s data bank were not measures that deserved a violent Afghan military response. By firing mortars at such border constructions, the Afghan government is not helping its people. It can only help them by jointly agreeing with Pakistan on not only tightening border entry rules but also ensuring that, in future, a joint mechanism is set in place where borders are crossed only at designated border crossing points after fulfilling all formalities attached with such crossings.

In a region where fighting proxy wars is the norm, the military advice to the aspirants of fighting proxy wars is that whoever controls the border also controls the battlefield dynamics of the proxy battlefields. The construction of a border fence by India on our eastern border vividly explains this point. Since the completion of that border fence in 2003, India has not only been able to control illegal crossings over its border with Pakistan, it has also considerably reduced the level of participation by various jihadi groups in the proxy war in Kashmir.

It is no secret that India maintains an anti-Pakistan presence in Afghanistan and both countries are engaged in fighting proxy wars across the Afghan border. For Pakistan to defeat the enemy-imposed proxies, it will have to prevent the enemies of the state from freely crossing its western borders. Efficient management of the Afghan border is the next critical stage of Operation Zarb-e-Azb and the Torkham border crossing is where it has kick-started.

When the Pope visits Pakistan