Two women and a child were injure­d in Shah Alam villag­e when the roof of their house collap­sed
By Our Correspondent / Photo : Abid Nawaz
Published: June 22, 2016
Tweet Email 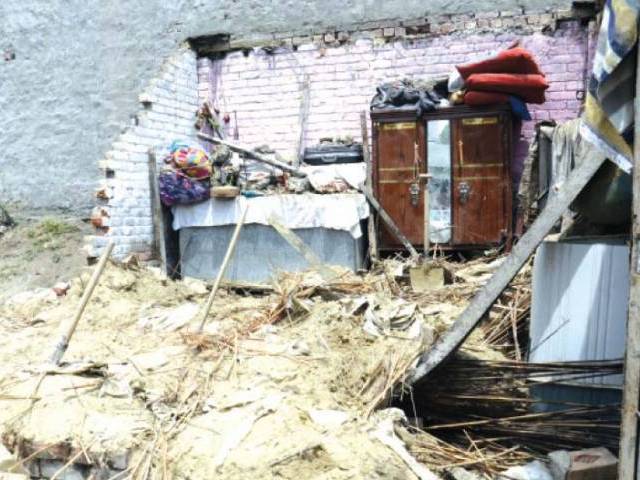 Rescue 1122 officials said the roof had been in a dilapidated condition. PHOTO: ABID NAWAZ/EXPRESS

LAHORE: Four members of a family died on Tuesday and six others sustained injuries when the roof of their house collapsed.

Brothers Riaz and Hasnain had lived in the single-storey house located in Gosha Ahbab, Azam Garden, on Multan Road.

Talking to The Express Tribune, Riaz said that his sister-in-law, Shabnum, had come from Pakpattan to visit them.

His mother, Manzoora Bibi, 60, his wife Shama Bibi, 22, Hasnain’s wife Hafeeza Bibi, 35, along with their children had gathered at the house to meet the guest.

“I was in the neighbourhood when the roof collapsed. I heard the noise and ran back and saw that the roof had caved in,” he said.

Qasim, a neighbour, said that he was standing in his house when he heard the explosion and the screams. “I rushed out and saw that the house had collapsed. We started to remove the debris and alerted Rescue 1122. We pulled out all the family members. Rescue teams then took them to the Lahore General Hospital for treatment,” he said. Four of the injured were pronounced dead at the hospital.

A Rescue 1122 official said that the roof had been in a dilapidated condition. “The roof was made of mud. When rainwater stood on it, it caved in,” he said.

Two people were killed and three others were injured in separate rain-related accidents in Bhakkar on Tuesday.