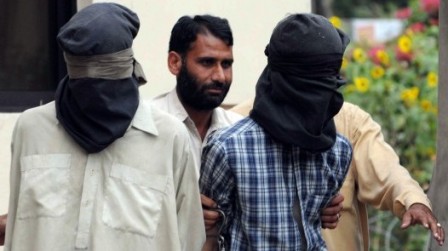 The police presented the two would-be suicide bombers in front of the media. (AFP)

PESHAWAR: Peshawar police have arrested two would-be suicide bombers and seized two suicide jackets – along with other explosive materials – from their possession on Thursday.

Both the would-be bombers were presented before the media by the police.

Speaking to the media, police revealed that both terrorists were arrested from University Town area of Peshawar. They said one of them belongs to Orakzai agency while the other – who is a student at a private university in Peshawar – belongs to Hangu.

Police said both the would-be bombers had received special training to carry out suicide attacks.