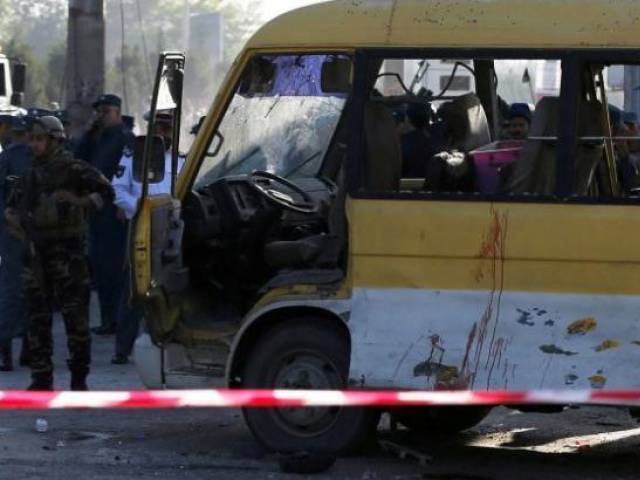 KABUL: A busload of Nepali security guards were among 25 people killed in a string of bombings across Afghanistan on Monday, days after Washington expanded the US military’s authority to strike the Taliban.

A Taliban spokesman on Twitter claimed the first attack, which killed 14 Nepali security guards working for the Canadian Embassy in Kabul in a massive blast that left their yellow minibus spattered with blood.

However Islamic State’s affiliate in Afghanistan and Pakistan released a competing claim in which they named and pictured the alleged bomber, according to the SITE monitoring group, in what would be their most significant attack in the country.

An Afghan intelligence source said officials were investigating the IS claim, which was flatly denied by the Taliban.

The Taliban also claimed a second, smaller blast in south Kabul on Monday that the interior ministry said killed one person. The bombings were followed hours later by an attack on a market in the remote northeastern province of Badakhshan that authorities said killed at least 10 people, with the death toll set to rise.

The wave of violence comes 10 days after Washington announced an expansion of the US military’s authority to conduct air strikes against the Taliban.

Police said the attack on the Nepali guards was carried out by a suicide bomber on foot early Monday on a main road leading east out of the capital towards the city of Jalalabad. Fourteen Nepali nationals were killed, the interior ministry said in a statement, with nine wounded – five Nepali citizens and four Afghans.

Taliban spokesman Zabihullah Mujahid claimed responsibility for the attack on social media, saying it was “against the forces of aggression” in Afghanistan. The Islamic State claim, which SITE said was released on Twitter and Telegram, named the bomber as Irfanullah Ahmed and pictured him armed and dressed in combat fatigues in front of an IS flag.

The Taliban poured scorn on the IS claim. “They neither have the capability to carry out attacks in Kabul, and nor are they supported by people. Today’s attack was carried out by one of our mujahideen, and Da’ish claiming they did it, is baseless and hollow,” Mujahid told AFP by phone, using an alternative name for IS.

The Kabul blasts were followed hours later by a motorcycle bomb in a crowded market in the Keshim district of Badakhshan that local officials said killed at least 10 people and wounded 40.

The UN mission in Afghanistan said five children were among the dead as it condemned the attack, for which no one has yet claimed responsibility.