PTI to enter next elections with winning horses

PTI to enter next elections with winning horses

Jahang­ir Tareen talks about how the party plans to ensure its victor­y in the next genera­l electi­ons
By Irfan Ghauri
Published: June 20, 2016
Tweet Email 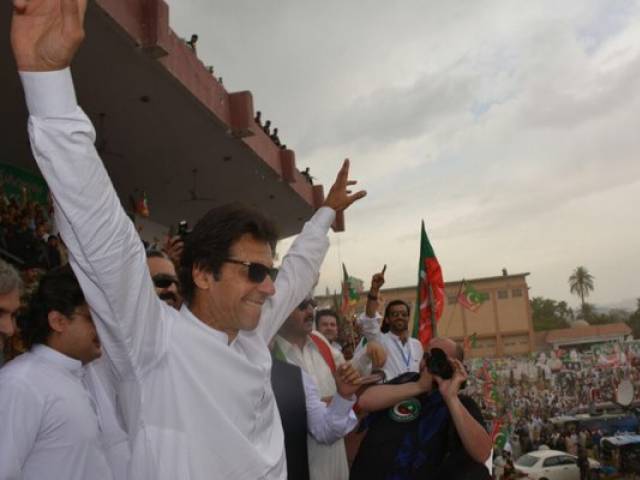 Jahangir Tareen talks about how the party plans to ensure its victory in the next general elections. PHOTO: PTI

ISLAMABAD: Call it reverting to traditional politics of status quo or recognition of realities on ground, Imran Khan’s Pakistan Tehreek-e-Insaf (PTI) now plans to contest the next elections with ‘winning’ horses at the forefront.

The party appears ready to assimilate individuals who have strong personal clout in their constituencies to maximise strength in national and provincial legislatures necessary to form government.

This policy is evident from the party’s allocation of tickets for the July 22 general elections of AJK Legislative Assembly. In many AJK constituencies, PTI ideologues complain of being ignored as tickets are awarded to those who joined party only a few weeks before the election date was announced.

During a recent interaction with journalists, Imran disclosed his plans of fielding strong candidates, especially in rural constituencies to ensure victory in next elections. In this scheme, PTI will prioritise ‘electables of good reputation’ – a rare breed in contemporary politics –while giving ideological workers some tickets in a few urban constituencies where the party feels it has strong vote bank.

Among the proponents of this idea is PTI Secretary General Jahangir Tareen. In an interview with The Express Tribune, Tareen shared his own experiences of electoral politics and the prerequisites for winning an election.

“Our basic narrative is change. We will build on this narrative by questioning why change is necessary for you. You then need to transform this narrative into votes, and [for that] you will need strong candidates,” he said.

Tareen believes that in the contemporary situation, even when a party succeeds in delivering its message to masses, people – especially in rural areas – still give more consideration to individual candidates based on biradri (clan) and other personal affiliations. “For every constituency, besides a candidate for an MNA, you need a panel of MPAs to make a strong combination. You would have to consider biradris before awarding tickets to candidates. We have already started working on that,” he said.]

Last time, PTI could not get time to focus on this aspect because intra-party elections took quite long to consummate, he claims.

Asked if it does not contradict PTI’s basic doctrine, he said: “Our narrative will remain the same, it is our base. But at the same time having strong candidates is equally important especially in rural constituencies.”

“There are many good people around. We will only go with those who can align themselves with our narrative. I myself am among such people,” he remarked.

Tareen believes that maintaining personal contact with constituents, something traditional politicians are good at, is key to winning elections.

Traditionally people vote for the candidate who keeps contact with them by participating in their family functions and lends due and undue favours to them in what are commonly called the ‘thana and kucheri’ matters. Their ability to deliver in policymaking does not matter.

The Bane of actual democratic values, PTI has been raising its voice against this deep rooted trend.

Tareen returned to the National Assembly for the third time after defeating Siddique Baloch of the PML-N in the famous by-polls from NA-154 Lodhran on December 23. He had lost to the same candidate in the 2013 elections.

Before entering the 2013 race, Tareen’s last two consecutive victories in 2002 and 2008 elections from NA-195 were attribute to the blessing of his brother-in-law Makhmoom Ahmed Mahmood who was once considered his political mentor.

Winning the last year’s by-election with a margin of around 40,000 votes against the PML-N’s strong candidate is considered a big victory for Tareen and PTI. He shared his personal experiences of winning elections from a new constituency he created for himself.

“You need political acumen to contest and win an election. Basic thing here is the image of a candidate in the eyes of voters. You have to make a good image. Next comes building personal contact with people by visiting them.”

“Even if you have a good image, if you do not visit them, they will say we know he is a good person but he never personally requested us to vote for him,” Tareen said.

Tareen said PML-N goes for candidates who have a long experience of contesting elections and can collude with local power brokers at union and village level.

“I adopted a different approach. I focused more on the lower tier – the voters. But this did not mean I ignored local power brokers. I touched everyone, irrespective of whether they support me or not” he added.

Building up public pressure from lower level through aggressive campaigning, better organisational ability, projection of personal image and direct contact with politically important people in union councils and each village paid off for him in by-polls.