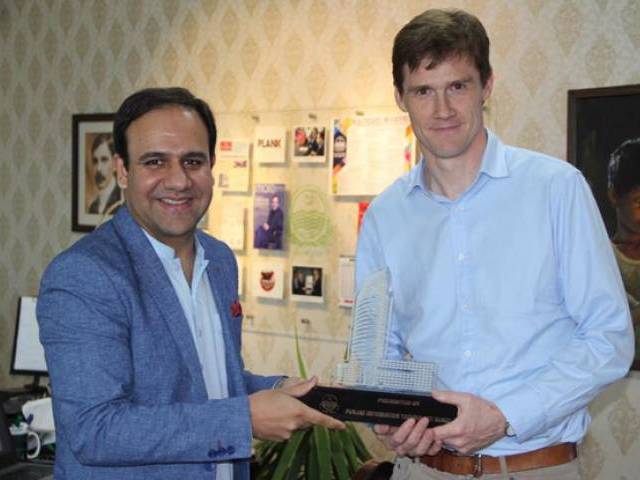 According to a press statement issued on Saturday, Casson said this during his visit to Punjab Information Technology Board (PITB).

PITB Chairman Dr Umar Saif gave a presentation on the working of the IT-based systems in the education sector.

Casson said that the British government was assisting Egypt in reforming its education system for 21.3 million students. “The Egyptian education system is facing problems of both volume and quality of output. I am very interested in learning about both technical methodology of system-wide education reform in Punjab, the data systems, transparency-cum accountability systems and the political management of reforms such as incentives, building alliances, overcoming vested interests etc,” he said.

Saif informed him about initiatives such as e-Learning Punjab, Open Data of Smart School Monitoring and Literacy Drive.

He said that visits made by the monitoring staff had also been made evidence-based and transparent. “Textbooks of grade 6 to 10 have been digitised with simulations, animations, videos supported with Urdu voice overs. The government has delivered 120,000 tablets among teachers and students to transform the traditional learning methodology,” Saif said. Dr Saif also presented him a souvenir of Arfa IT Tower.

British High Commissioner Thomas Drew called upon Pakistan Muslim League-Nawaz (PML-N) leader Hamza Shahbaz on Saturday. They discussed matters of mutual interest including way to promote cooperation between the two countries in various sectors of the economy.  Speaking on the occasion, Shahbaz said the federal and provincial governments were undertaking several projects with assistance from the United Kingdom’s Department for International Development (DFID) in the fields of education, health and other social sectors. He said the government was confident that it would tackle major issues faced by the country including power outages by 2018.  High Commissioner Drew assured him that the UK government would extend its full support to Pakistan in this regard.