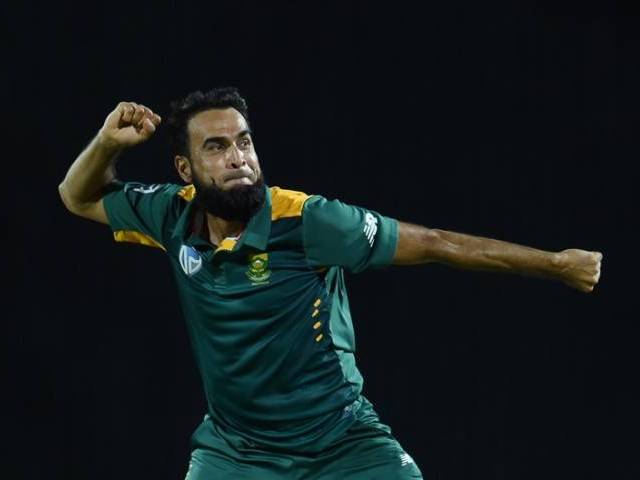 BASSETERRE, SAINT KITTS AND NEVIS: Imran Tahir wrote his name in the record books as South Africa completed a comprehensive 139-run victory over the West Indies in the sixth match of the Tri-Nation One-Day International series at Warner Park in St Kitts on Wednesday.

Defending a formidable total of 343 for four, the leg-spinner feasted on an inept Caribbean batting effort with outstanding figures of seven for 45 off nine overs, the best-ever returns by a South African bowler in the history of ODI cricket.

Along the way, Tahir, in his 58th match, surpassed the record of Morne Morkel as the fastest South African to 100 ODI wickets in terms of matches played.

“I’m really grateful for how things worked out for me today,” said a delighted Tahir. “It was a fantastic effort by the entire team and I’m just delighted to have played a part.”

Earlier, Hashim Amla’s 23rd ODI hundred highlighted a domineering batting effort from the Proteas after they were put in by home captain Jason Holder.

Tahir and Tabraiz Shami (two for 41) then extinguished the West Indian reply after a bright opening start, Tahir’s record harvest including three in one over as the hosts were dismissed for 204 off 38 overs.

Tahir and Shamsi, in just his second match, effected the breakthrough after the rousing start of 69 in less than ten overs by openers Johnson Charles (49) and Andre Fletcher (21).

Only 24 from Marlon Samuels among the accomplished batsmen represented any form of resistance to the spinners.

By virtue of the margin of their victory, A.B. de Villiers’ team moves to the top of the standings on ten points, one ahead of Australia and two more than the West Indies.

Competition shifts to Barbados for the final three preliminary matches, beginning with South Africa versus Australia on June 19 at Kensington Oval, ahead of the final at the same venue a week later.

Amla’s effortless innings of 110, which came off 99 deliveries and included 13 boundaries, set the Proteas on their way to the formidable total in partnership with Quinton de Kock.

Bristling with aggression in contrast to Amla’s serene progress, the left-hander contributed 71 in an opening stand of 182.

Their partnership established a new record for the first wicket in an ODI at the venue, eclipsing the previous standard of 160 set by former South African captain Graeme Smith and de Villiers against Australia at the 2007 World Cup.

All-rounder Chris Morris, back in the team after recovering from an injury sustained in the first match of the tournament in Guyana two weeks earlier, was promoted to number three in the order to accelerate the scoring and responded by belting 40 off 26 deliveries.

However it was Faf du Plessis who stole the show over the final overs of the innings, blazing an unbeaten 73 off just 50 balls in a hurricane knock decorated with six fours and two sixes.

De Villiers, whose dismissal on Saturday triggered the collapse that paved the way for an unexpected Australian victory, contributed 27 to the effort.

“We just need to pick ourselves up after this performance,” said a dejected Holder after the match. “We are still very much in the competition and need to put in the hard work before the next match.”