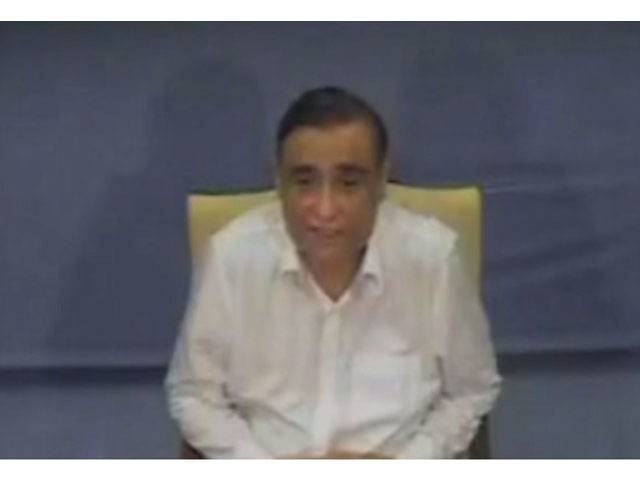 SCREEN GRAB OF THE VIDEO SHOWING DR ASIM HUSSAIN DURING AN APPARENT INTERROGATION.

“I did not know Owais Muzaffar before,” Dr Hussain says in a ‘confessional’ video clip that emerged on Wednesday night. The 80-second long clip, apparently cut out from a longer video, went viral on social media and was screened on several television channels.

Will die before giving statement under duress, says Dr Asim

The former federal minister is currently in the custody of National Accountability Bureau (NAB) in Karachi. He was first arrested by the paramilitary Rangers on charges of corruption and facilitating terrorists in August 2015.

Before he was handed over to NAB, Dr Asim remained in police custody for a short time and was given a clean chit.

Though a number of alleged confessional statements of Dr Asim have been leaked by law enforcement agencies and NAB in the past, this is the first time a video has been released. NAB officials, however, have neither confirmed nor denied the video.

In the video, Dr Asim is seen wearing a white shalwar kameez and sitting on a solitary chair in the room. During the short clip, he talks particularly against Muzzafar.

“When the second (PPP) government [in Sindh] came to power, he [Muzaffar] came to the fore and became the virtual CM,” Dr Asim claims adding that Muzaffar was raised by Zardari’s mother.

“He [Muzaffar] was involved in all kinds of corruption, all types of projects and land [grabbing]. He never let an opportunity pass, any CCTV project or anything else.”

The former petroleum minister, who also headed the Ziauddin Hospital in Karachi, narrated how he uncovered a scam Muzaffar was involved in. “Once a doctor told me that a vaccine which costs Rs600 has been purchased at a cost of Rs1,000 and is now being sold at a market in Multan,” he said adding that upon investigation the doctors’ claims were proved.

Being a close confidante of Zardari, Dr Asim said he complained to the former president about the matter.

“I complained to Zardari and asked him to explain to [Muzaffar] that everything else that you are doing is separate, at least don’t play with the health and lives of people,” he says. “After I complained, Muzaffar threatened me that ‘I will give you such a vaccine that you will remember it forever. Stop speaking against me.”

Aminul Haque nominated in FIR for ‘propaganda’ against Rangers