If succes­sful, one member of the team would become younge­st Brit to scale peak
By Our Correspondent
Published: June 14, 2016
Tweet Email 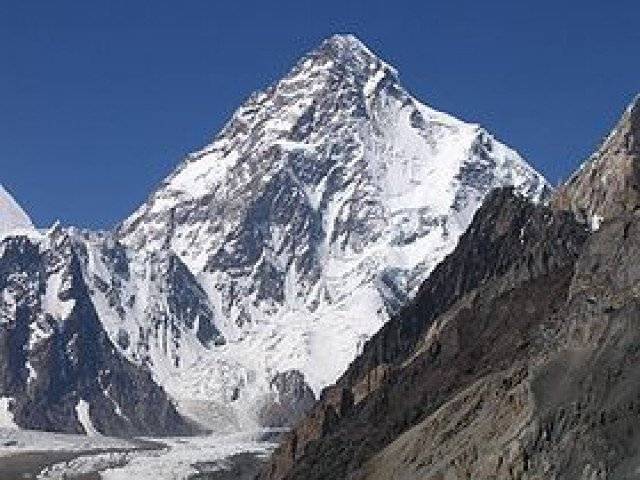 If successful, one member of the team would become youngest Brit to scale peak. PHOTO: FILE

ISLAMABAD: The first British expedition to attempt to tackle K2 for 12 years, met the Acting British High Commissioner to Pakistan, Patrick Moody, in Islamabad to discuss their record-breaking mission.

The seven-member expedition is led by Di Gilbert, from the Highlands, who could become one of the first British women to get the “gold medal of mountaineering”.

The group also includes Captain Jake Meyer, from Gloucestershire, who could become the youngest Brit to reach the top of K2, which is the world’s second highest mountain. Nepalese Sherpa Mingma Dorchi could also become the first person to climb the mountain three times.

The group is completed by fellow Brits, Pete Brittleton from the Lake District, and Paul Etheridge from Ipswich, as well as Canadian Jean-Bernard Charron and Nepalese Sherpa Phurba Ongel.

They also met the head of the DFID, Pakistan Joanna Reid, British Consul Jon Ryan, and Islamabad-based diplomat Richard Oldfield, who is also planning to climb to K2’s base camp.

Only eight other Brits have reached the summit of K2, three of whom died on the descent.

Speaking to the mountaineers, Acting British High Commissioner Patrick Moody said, “K2 is the second highest mountain in the world, but its inaccessibility, the technical requirements and the danger it presents, makes it the most prized trophy for the world’s best mountaineers. The team’s bravery, good humour and attitude before taking on this enormous challenge, is truly humbling.”

“I am also very happy to see the re-emergence of Pakistan as a destination for the best mountain climbers in the world”, he added.