The explor­er is determ­ined to climb K2 in six weeks
By Our Correspondent
Published: June 14, 2016
Tweet Email 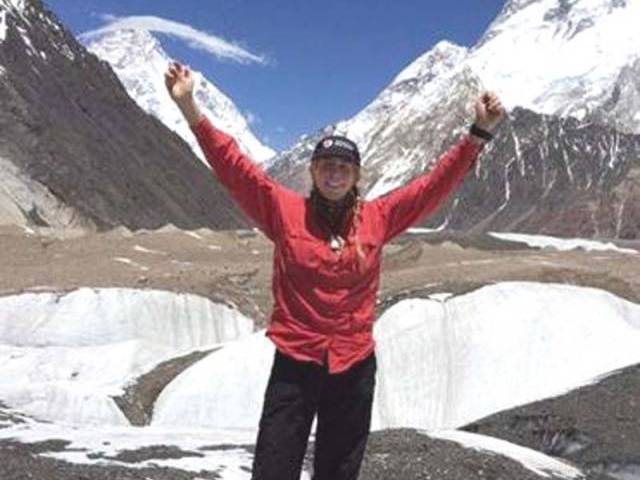 ISLAMABAD: Vanessa Audi Rhys O’Brien, an American-British mountain climber, explorer, and a former banker aims to be the 19th American and the first woman to climb K2, the world’s second-highest mountain.

“My climbing experience has taught me respect and appreciation for the resilient communities of Gilgit-Baltistan in Pakistan,” she said while addressing a press conference before embarking on her climbing expedition at a guest house here on Monday.

Vanessa’s attempt to become the first American woman to reach the K2 summit in July 2015 was thwarted by inclement weather. A member of the expedition’s team was injured by falling rock.

O’Brien achieved a Guinness World Record in 2015 for being the fastest woman to climb the seven highest peaks in every continent in the shortest period of 295 days.

Besides O’Brien, the team will comprise Estalin Suarez from Ecuador and Jamling Bhote from Nepal, and Flight-Lieutenant Rahim as a liaison officer.

O’Brien is an accomplished explorer and seems determined to climb K2 in six weeks.

She wants to raise awareness among the Americans about the rich ecological and cultural heritage of Gilgit-Baltistan.

A fellow of Royal Geographical Society and Guinness World Record holder for being the fastest woman to complete the Explorer’s Grand Slam, the 51 years old former banker said her expedition was self-sponsored.

She plans to carry the UN Women’s flag, the US, British and Pakistani flags to the summit of the 8,611 metres (28,251 feet) peak as a sign of solidarity, friendship, gender equality and women empowerment.

Vanessa said that before coming to Pakistan she had a ‘terrible misconception’ about the country.

Replying to a question she said that due to global warming, glaciers are melting fast and may cause floods and avalanches making an expedition in summer very dangerous.

She praised Pakistani women and said that they were very courageous and full of talent.

K2 is one of the world’s most dangerous mountains and has the second-highest fatality rate with 377 successful summits and 86 fatalities.