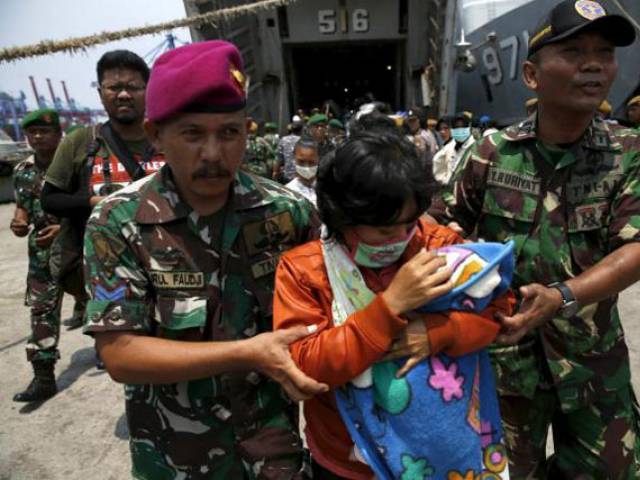 The leaders of the controversial Nusantara Movement are facing lengthy jail terms after being detained last month PHOTO: REUTERS

JAKARTA, INDONESIA: Three leaders of a banned Indonesian sect have been arrested for blasphemy and treason, police said Tuesday, drawing condemnation from activists who accuse authorities of persecuting the men for their beliefs.

Critics say the crackdown on Gafatar, which has been accused of luring followers to practise a deviant brand of Islam, is the latest example of a minority group coming under attack due to their beliefs in the world’s most populous Muslim-majority country.

The group’s former leader Mahful Muis Tumanurung, ex-spiritual leader Ahmad Mushaddeq and his son Andri Cahya — who also used to be a senior figure in the group — have been detained, Andrianto said.

Blasphemy carries a maximum penalty of five years in prison while treason is punishable by a life sentence.

While the blasphemy accusation relates to their beliefs, the treason claim stems from allegations they were trying to establish an independent state, according to their lawyer Fati Lazira.

He said the accusations against his clients were baseless.

Pakistani Christians living in fear after mob killings over blasphemy

The use of the blasphemy law is particularly controversial, as rights groups have repeatedly pressured the government to repeal what they say is outdated legislation used to punish people for peacefully expressing their beliefs.

Andreas Harsono, Indonesia researcher at Human Rights Watch, said it was the first time the blasphemy laws had been used since President Joko Widodo, known as “Jokowi”, took power in 2014.

“Human Rights Watch calls on the Jokowi administration to stop the case against the three Gafatar leaders and stop using the blasphemy law against religious minorities in Indonesia,” he said.

As anger mounted, a mob attacked Gafatar followers on a communal farm on Indonesia’s part of Borneo island, prompting the evacuation of hundreds of them. Soon afterwards, the government banned the sect and the country’s top Islamic clerical body declared their beliefs heretical.