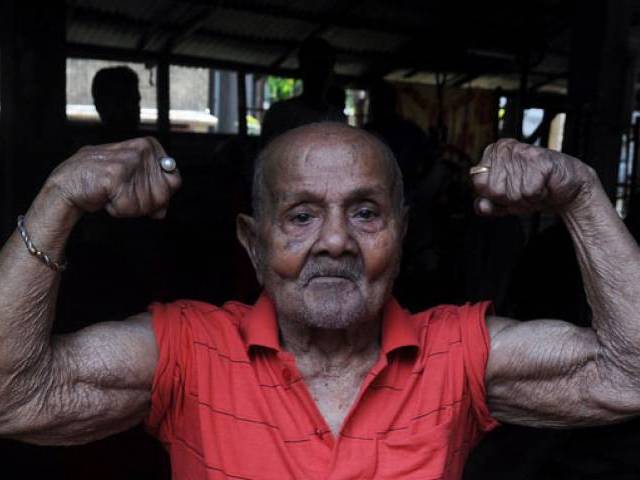 This file photo taken on March 16, 2012 shows Indian bodybuilder Manohar Aich at a gymnasium on the eve of his 100th birthday in Kolkata. PHOTO: AFP

KOLKATA: Manohar Aich, the bodybuilder who became the first Indian to take the Mr Universe title in 1952 and won the nickname ‘Pocket Hercules’ for his tiny stature, has died aged 104.

Aich, who stood just 1.5 metres (four feet, 11 inches) tall, started lifting weights in 1942 when he was working as a gym instructor in the Royal Indian Air Force.

That job ended when he slapped a British officer who had made an offensive remark about Indians, earning him a brief jail term — a punishment he later described as a “blessing in disguise”.

“The jailor had been very kind and allowed me to train. In fact, he encouraged it,” Aich told the Indian Express newspaper in an interview to mark his 100th birthday.

He emerged from prison as India won its independence in 1947 and decided to settle in the eastern city of Kolkata, where he turned to selling coconuts for a living.

But his interest in bodybuilding continued and in 1951 he travelled to Britain to take part in the Mr Universe competition.

When he missed out on the title he decided to stay on in Britain and have another go, taking a job with British Rail. In 1952 he became the first Indian ever to win.

Aich died at his home in Kolkata on Sunday, his son told AFP by phone. “Our father used to say discipline comes from within. He always maintained a strict regimen — sit-ups, push-ups,” said Manoj Aich.

“His simple diet of milk, fruits and vegetables along with rice, lentils and fish kept him healthy. He never smoked, nor did he take alcohol.”

Hunt on for shark that killed Australian diver