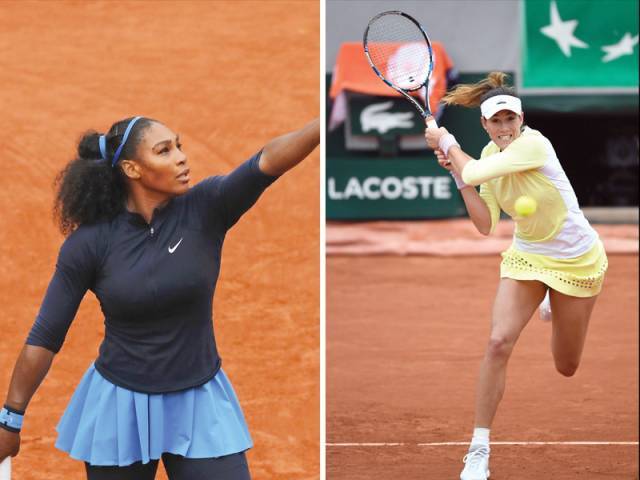 Serena won that in straight sets for her 21st Grand Slam title, but Muguruza, at 22, 12 years younger than the American, has improved further since then.

The fourth-seeded Muguruza, meanwhile, underlined her fine form with a 6-2, 6-4 win over Australia’s Samantha Stosur to reach a grand slam final for just the second time.

“The first set was not simple, she was playing so well,” Serena said of Bertens. “I need to keep my calm for the final and hope the fans will be with me.” Serena already looked out-of-sorts in her quarter-final on Thursday against 60th ranked Yulia Putintseva, having to claw her way back from a set and a break down to get through.

Muguruza, who is the first Spanish woman in 16 years to reach the French Open final, has had it easier in the other half of the draw.

She was in command against 32-year-old Stosur, a former US Open champion, from the start but had difficulty putting away the match from 5-2 up in the second.

“Emotions can sometimes be bad when you make a final,” said Muguruza, who defeated Serena in straight sets in the 2014 French Open second round. “Sometimes you just have to stay calm, prepare yourself as best you can and play with no regrets.”

Murray into final against Djokovic

Andy Murray will play Novak Djokovic in the French Open final after the second seed ended Stan Wawrinka’s reign as the champion at Roland Garros yesterday.

Murray reached the title match in Paris for the first time with a comprehensive 6-4, 6-2, 4-6, 6-2 semi-final win over the Swiss title-holder who was on a 12-match winning streak in the tournament. Djokovic earlier won through to his fourth French Open final with a one-sided 6-2, 6-1, 6-4 win over Dominic Thiem of Austria.

Sunday’s two 29-year-old finalists have already played each other in six Grand Slam finals with Djokovic winning four times in Australia and Murray emerging on top at the US Open and Wimbledon.