Musici­ans from 20 countr­ies prove that music has no langua­ge
By Entertainment Desk
Published: June 3, 2016
Tweet Email 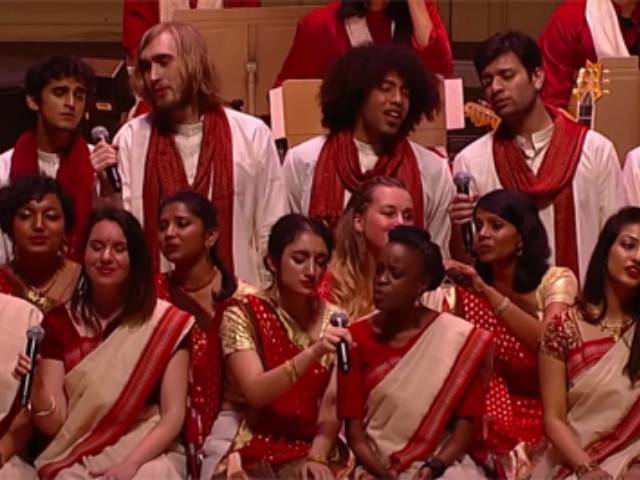 Musicians from 20 countries show that music has no language. SCREENGRAB

A number of Berklee College of Music students from across the world showed the power of music by performing a soulful rendition of Kun Faya Kun.

The Berklee Indian Ensemble left their audience mesmerised when they performed AR Rahman’s hit qawwali from the 2011 film Rockstar at Boston’s Symphony Hall on May 30.

The performance was recorded live at Boston’s Symphony Hall. SCREENGRAB

Each one delivered a power-packed performance with immaculate diction, proving music has no language.

Video: Adele slams fan for filming her during live performance

Sanjeeta Bhattacharya from India on the vocals. SCREENGRAB

The live performance spanning over twelve minutes takes you to the world of Sufism, especially when Fares Btoush and Layth Al Rubaye from Jordan work their magic with Oud and soulful vocals. Layth Al Rubaye from Jordan on the vocals. SCREENGRAB

The concert was produced by Annette Philip.

See it to believe it!