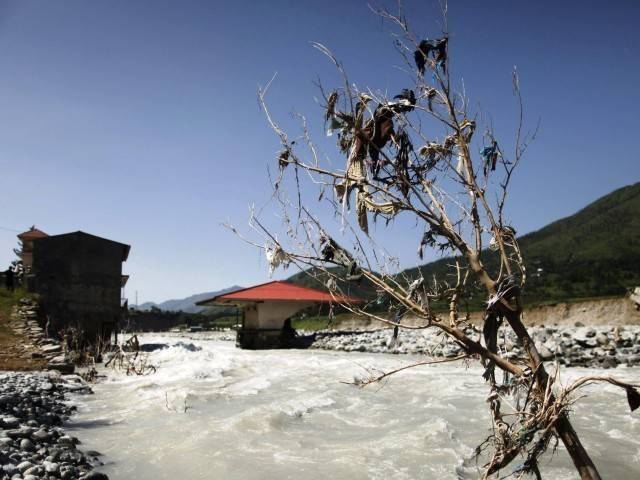 PESHAWAR: The Climate Change Cell working under the K-P Environment Protection Agency (EPA) has completed its climate change policy—the first by any province. It has now been sent to the government for approval and implementation.

A copy of the policy, available with The Express Tribune, explains the short and long-term repercussions of climate change. In 10 chapters, it tries to devise a policy framework to reduce the effects through adaptation and mitigation.

Deducing from the Intergovernmental Panel on Climate Change’s report, it says the province will be faced with longer summers and milder winters. It warns of severe monsoon rainfalls and glacial melting in the districts of Buner, Shangla, Upper Dir and Lower Dir, Swat, Chitral in the northern mountain ranges.

However, it warns that because of the increase in precipitation, the alluvial soil of districts from Peshawar to Hangu and Bannu till DI Khan will be affected by massive riverine floods, causing big changes in food production.

Farmers will have to alter the kind of crops they grow depending on the increase in temperatures and depleting water levels.

The policy also takes into account the impact of climate change on biodiversity and changes in the ecosystem of the province. Of 100 widespread species, 90% of them are from K-P, including seven bird specimens and 12 internationally recognised as endangered migratory birds.

Leadership for Environment and Development (LEAD) Pakistan’s Hassan Akhtar Rizvi has helped shape the climate change policy. He said the country is not a very high emitter of greenhouse gases – approximately 0.8% of global emissions.

Meanwhile, initiatives based in K-P, such as the Billion Tree Tsunami project, were commendable. However, the effects of climate change still pose a considerable threat to the province. He also said that while adaptation was a provincial subject, mitigation was more federally driven. Pakistan was signatory to 14 international agreements related to the environment of which 13 applied to K-P.

The advisory committee which was asked to review the policy remained of the opinion that there was little that would explain implementation. This was a point taken up by EPA Director Hussain Ahmad, who said many members of the committee did not reply to suggested changes in the policy. “There are gaps that will need to be filled,” he said, asking that the policy be reviewed after consultation with stakeholders.

It was suggested that a provincial climate change policy committee be constituted to meet biannually to measure the risks involved and come up with feasible methods for implementation.  However, the policy is only a framework that provides a path and it is the job of the government to provide strategy and action plans necessary for implementation.

While the policy touches on green growth and a compatible development, it barely mentions problems faced by thousands of people displaced by climate induced or environmental migration in the last decade. Although K-P is a province faced with mammoth security challenges, the policy does not mention them with relation to changes in climate.

A majority of the recommendations mentioned in the policy require action plans for implementation, but there is no reference if the government is willing to provide the necessary help.