George Cloone­y and his wife Amal turned up heat midday as they visite­d the Vatica­n City for a semina­r led by the Pope
Published: May 31, 2016
Tweet Email 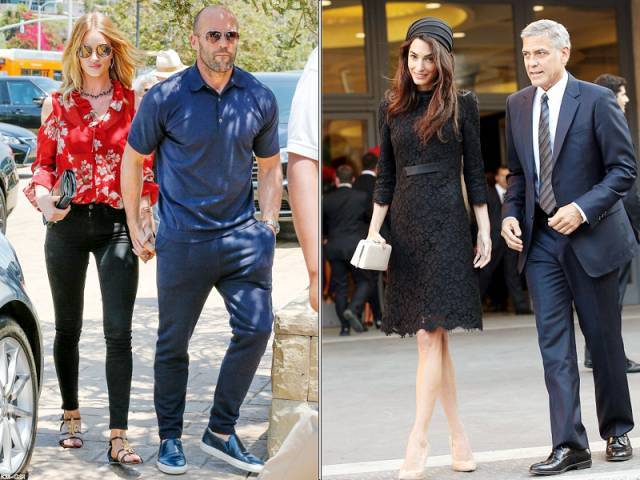 Forget a movie and dinner — couple sightings in Hollywood are a rather more glamorous affair. George Clooney and his wife Amal turned up the heat midday as they visited the Vatican City for a seminar led by the Pope. While Rome was ignited with fashion; courtesy the Clooneys, Hollywood’s sweethearts Rosie Huntington-Whiteley and fiancé Jason Statham were utter eye-candy, as they were spotted heading to the Soho House in Malibu. Mrs Clooney proved she could pull off any style, as she aced the demure look this week in Rome. The 38-year-old human rights lawyer stunned in an Atelier Versace lace dress, coordinated with a black headpiece that resembled a chic turban. Adding nude heels and clutch bag to the mix only added to her impeccable sense of style. Wearing her trademark glossy chestnut hair in loose waves, the Lebanese-British lawyer kept her make-up minimal, donning mauve-pink lipstick. Meanwhile, hubby George, looked dapper in a deep blue suit with a white crisp shirt underneath and a corresponding striped tie. The duo looked quite the power couple as they headed to the prestigious event in the Italian capital. The Transformers: Dark Of The Moon star and her fiancé looked like the ultimate fashion connoisseurs as they sauntered towards the Soho House in Malibu. The 29-year-old supermodel and The Transporter actor were certainly effortlessly chic — Rosie cut a picturesque figure in a floral sheer silk red blouse tucked into skin-tight black jeans while her beau donned a navy shirt with matching joggers. Accessorising seamlessly, the face of Balmain added a necklace, sunglasses by Dita Eyewear, a YSL snakeskin patterned clutch and gladiator sandals with a gold alligator detail. Jason, on the other hand, looked dapper with his classic aviators on.