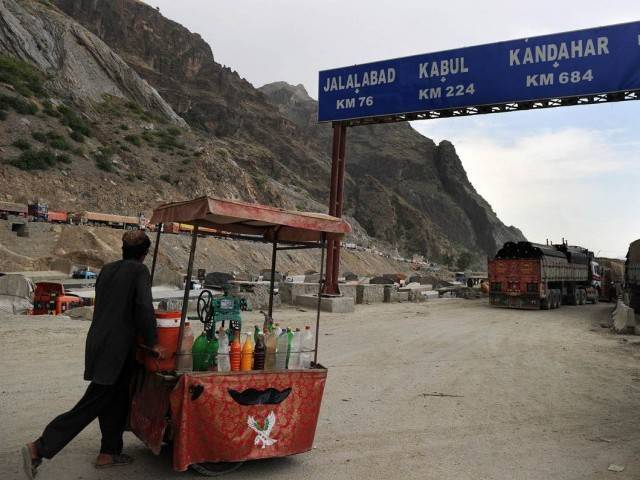 PESHAWAR: The adjective ‘porous’ will soon disappear from descriptions of the 2,450-kilometre-long border between Pakistan and Afghanistan, as the first border management system at Torkham, in Khyber Agency, will become functional from June 1, a senior security official said on Monday. People without a valid passport will no longer be allowed to cross into Pakistan.

The move is part of a comprehensive project to secure the Durand Line that has been a bone of contention between the two neighbours. After Torkham, the rest of the seven entry points into Pakistan from Afghanistan – right from Arandu in Chitral to Ghulam Khan in North Waziristan – will be built in the same manner, subject to funding and other modalities involved, said the official.

An estimated 10,000 to 15,000 people cross the border daily on either side at Torkham without proper travel documentation. Authorities have long believed that most terrorist attacks on Pakistan’s soil originated from Afghanistan. However, the installation of the border management system has not been an easy task.

The Torkham border was shut down on May 10 for four days after Afghan forces blocked a Pakistani authorities’ move to fence their side of the border, even though the hedge was 30 metres inside Pakistani territory. The Angoor Ada border post that was handed over to the Afghan defence ministry on May 21 as a trust building measure was closed for nine days by Afghan authorities.

The apparatus for the border management system has been set up at the Shaheed Mor check-post which is some 3.2 kilometres away from the Torkham crossing. “There are specific laws of the FIA that have been extended to the area to fill in the legal gaps,” explained the official. “Nobody will be allowed beyond this point.”

However, the Easement Rights of Divided Tribes along the Durand Line, an understanding reached between the British Raj and Afghanistan that allows tribes straddling the border to move freely, will only be extended to the Shinwari tribe settled on both sides of the border – but that too within 20 kilometres of the border.

Asked if Afghan refugees possessing Proof of Registration Cards (PoR) would be allowed to enter Pakistan once they crossed over, the official said according to the law, the refugee status of an individual ceases if he/she crosses into his/her own country. “However, this is still a proposal.”

There are more than 40 points on the Pak-Afghan border that have been exceeded by Pakistan or Afghanistan, said the official. However, security-related issues remain a determinant factor in resolving the problem. Pakistan has 535 border posts on the Durand Line against just 145 of Afghanistan. By this ratio there is one Pakistani border post at every two kilometres and an Afghan post at every 7.8 kilometres.

“Stationing troops at the zero-point is not a problem, but securing the post against attacks from the other side is,” he said, adding that there were huge gaps in the border that had to be plugged because of militant groups use safe havens in Afghanistan as a spring board for mounting attacks in Pakistan whenever they find an opportunity. “These posts have been created by mutual understanding and will be vacated once a proper security mechanism is put in place that guarantees the space will not be taken by terrorists,” he added.

The border posts on the Pakistani side will be handed over to the Frontier Corps within a span of three years, depending on the overall regional developments and the future of the status of Fata in the shape of Fata reforms.

Another official explained that there were two areas in Fata where militants from across the border were still attacking, Alwara in North Waziristan and Rajgal in Khyber Agency. However; forward line troops have secured the areas surrounding these two zones to effectively check infiltration.

War with India is not an option: Basit