Taxes collec­ted from the stock market do not match the strong perfor­mance of PSE, said expert­s
By Shahbaz Rana
Published: May 30, 2016
Tweet Email 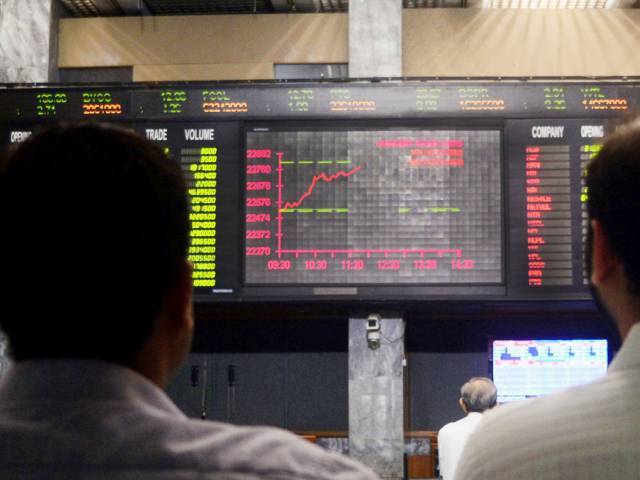 Taxes collected from the stock market do not match the strong performance of PSE, said experts. PHOTO: AFP

ISLAMABAD: The tax burden of non-filers of income tax returns is likely to go up by almost half on gains they make by trading shares at the Pakistan Stock Exchange (PSE), as the government is likely to introduce a new income tax regime for them in the new budget.

The government will also introduce a new sales tax regime for five export-oriented sectors, particularly the textile sector, to address a longstanding issue of industrialists. This regime will give industrialists about Rs20 billion in tax benefits next year alone and remove a permanent source of friction between them and the tax authorities.

Salaried persons could now come under the tax hammer

However, consumers will not gain anything from the new arrangement as they will still pay 5% sales tax on the purchase of garments and the rate may go up to 7% in the new budget.

Both proposals on a capital gains tax (CGT) and a new sales tax regime are part of the Money Bill 2016 that Prime Minister Nawaz Sharif will consider for approval during today’s (Monday) cabinet meeting.

For the first time, the government will also extend the concept of separate tax rates for filers and non-filers to the stock exchange. According to the proposal, the tax rate on shares sold by non-filers within a year may be set at 18%. In this category, the rate for filer may remain unchanged at 15%. The non-filer’s tax burden will be 20% more than the filers will pay.

Govt may double tax on transfer of properties

The rate of CGT on shares sold after one year but within two years could be fixed 16% for non-filers against 12.5% for filers – reflecting an increase of 28% for the non-filers.

The tax rate may be fixed at 11% for non-filers on the shares that they sell after two years but within four years of holding. The non-filer rate is 46.7% higher than what the government charges from the filers of the income tax returns in this category.

Three years ago, the government introduced the concept of filers and non-filers to encourage people to come in the tax net. The idea was that higher tax rates would compel people to file returns. However, the concept has become a source of earning for the government, as the government’s tax base has further shrunk by 18.4%. Against roughly 1.2 million filers last fiscal year, this year only 980,000 filed their returns.

Dar on Sunday accepted industrialists’ demand of declaring the entire local and foreign supply chains of five export-oriented sectors to be charged at zero sales tax.

Under the zero-rating regime, the manufactures pay the sales tax on purchases but the government subsequently returns the whole amount. These give sectors are textile, carpets surgical, sports and leather.

“The finance minister has announced plans to declare the whole textile supply chain zero-rated, which is in line with the promise made by Prime Minister Nawaz Sharif,” All Pakistan Textile Mills Association (APTMA) Chairman Tariq Saud said after meeting Dar.

The decision will reduce the cost of doing business and exports may increase by 25% in the next two years, said Zubair Motiwala, a business community leader. The decision will extend Rs20 billion in tax benefits to industrialists.

However, the government has managed to get something in return for it. The retail sales of fabric and garments have not been zero rated, which will be charged at the applicable rates. Secondly, the government will not refund the sales tax that it collects at the rate of 17% on packaging materials of all the five export-oriented sectors. This will give it extra revenue of Rs8 billion annually.